Take a trek around campus with historic cell-phone...

Take a trek around campus with historic cell-phone tour 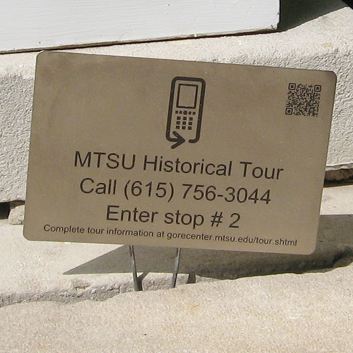 MTSU offers countless activities to the public, but many of the goings-on fall behind the scenes, like the Historic Cell Phone Tour of campus offered by the Albert Gore Research Center.

Markers like this one are found across the MTSU campus as part of the University's Historic Cell Phone Tour. Users can simply dial the number on the marker and enter the stop number to learn more about the site where they're standing. (MTSU photo)

The project began last fall and focuses on 17 locations on the historic west side of campus, providing information about the people for whom the buildings were named as well as some general history.

The tour is set apart from other cell-phone tours by its incorporation of original audio clips from oral history interviews conducted by the Albert Gore Research Center.

Users can take the tour while strolling along the west side of campus. Signs outside buildings on the tour’s stops provide a number to call to hear recorded narration of MTSU’s rich history.

QR codes—square codes that can be scanned by a smart phone—take the tourist to a website featuring the list of stops on the tour. But it’s not necessary to have a smart phone to access the tour; users can simply call 615-756-3044 to choose the various stop numbers and hear the recorded information.

Users also don’t have to be on campus to participate in the tour. The tour website, http://gorecenter.mtsu.edu/tour.shtml, lists all the stop numbers, so you can call from home and still hear the history of each building.

The tour, created by Dr. Jim Williams, Gore Center director and history professor, has had 144 unique callers, using a total of 907 minutes, since it launched in September 2011.

Williams says the Office of Marketing and Communications has expressed an interest in upgrading the tour and possibly developing an app for smart-phone users.

“I’d like to see an app that would be GPS-enabled so that someone walking around campus would be prompted that a stop is nearby,” Williams says. “They could also view historic photos along with audio if they wished.”

In the meantime, Williams says, he’s updating the tour’s website just in time for the upcoming Alumni Spring Weekend.