On the Podium: Guest lecturers.. 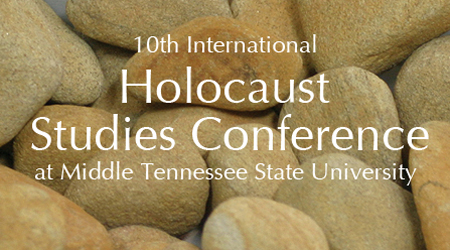 “Global Perspectives on the Holocaust” is the theme of the 10th International Holocaust Studies Conference in the James Union Building at MTSU Oct. 19-22.

The gathering is sponsored by the MTSU Holocaust Studies Committee, whose mission is to encourage interdisciplinary study, teaching and scholarship in the area of Holocaust and genocide studies.

The conference will feature special public presentations, or plenary sessions, by four top researchers in the field, including:

Each of the plenary sessions is scheduled in the James Union Building. There is no admission charge for these special presentations.

Other topics for the conference’s daily sessions include humanitarian intervention to fight atrocities, the impact of American fiction on contemporary Holocaust awareness, and parent-child separation as a means of survival during the Holocaust. One session, slated for 1:50 p.m. Friday, Oct. 21, will feature Holocaust survivors.

Another highlight of the four-day conference will be the free public screening of “I’m Still Here: Real Diaries of Young People Who Lived During the Holocaust,” featuring actors Kate Hudson, Zach Braff, Ryan Gosling, Amber Tamblyn and Elijah Wood and a musical score by Moby. It will be shown at 3 p.m. Friday, Oct. 21, in the JUB.

Zapruder, who wrote the 2005 documentary, is the granddaughter of Abraham Zapruder, whose amateur film of the 1963 Kennedy assassination is one of the most dramatic and debated historical resources of the 20th century.

MTSU students will perform a two-part Holocaust-themed dance, “Adumbration” and “Yours Faithfully,” introduced by Kim Neal Nofsinger, director of the MTSU Dance Program, at 4:10 p.m. Friday.

K-12 teachers from across the state will learn more about age-appropriate Holocaust instruction in the classroom on Saturday, Oct. 22. Presenters include Danielle Kahane-Kaminsky of the Tennessee Holocaust Commission.

The entire conference is free for MTSU faculty, staff and students. For more information, contact Dr. Nancy Rupprecht, chair of the MTSU Holocaust Studies Committee, at 615-898-2645 or holostu@mtsu.edu, or visit http://www.mtsu.edu/holocaust_studies/ for the complete conference schedule.