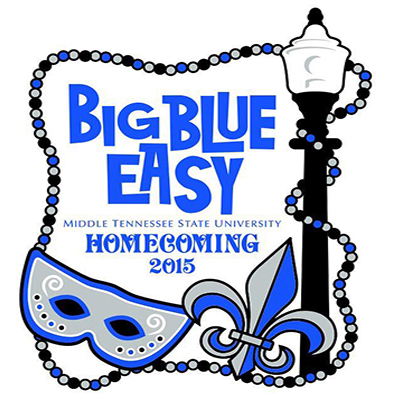 With MTSU’s homecoming — all the festivities and football game between the Blue Raiders and Vanderbilt — less than a month away, campus officials want the public to know the Homecoming Parade route will change noticeably.

This year’s parade and future parades will no longer turn down Middle Tennessee Boulevard from East Main Street but will instead continue east on Main to Baird Lane.

The 2015 MTSU Homecoming Parade and future parades will no longer turn down Middle Tennessee Boulevard from East Main Street but will instead continue east on Main to Baird Lane.

Looming road construction by the City of Murfreesboro on a section of Middle Tennessee Boulevard between East Main and Greenland Drive led MTSU officials to change the route.

The parade, an annual tradition that will start at the intersection of North Maney Avenue and East Main Street, will continue on East Main past the stone campus entrance monument at Old Main Circle.

Parade entries — including the Band of Blue and various floats and vehicles — will eventually turn left onto North Baird Lane and end at Alumni Drive.

“With the pending changes to Middle Tennessee Boulevard, we felt this was an opportune time to look at alternatives for our parade route,” said Joe Bales, vice president for university advancement.

“The parade is one of the hallmarks of our homecoming celebration and we wanted to assure our alumni and students, as well as the community, that it would remain a feature of the weekend. The route down East Main Street was important because it’s an important symbol of the direct connection between the university and the larger Murfreesboro community that we’re proud to be part of,” Bales added.

The homecoming date and game time were announced last spring. MTSU administrators, alumni relations and Student Government Association officials have known they eventually would have to change the route because of the road project.

For decades, the MTSU Homecoming Parade traveled down East Main Street and turned onto Middle Tennessee Boulevard, formerly known as North Tennessee Boulevard. Then it headed toward Greenland Drive before winding up at Faulkinberry Drive near Alumni Memorial Gym.

After decades of the MTSU Homecoming Parade traveling on Middle Tennessee Boulevard, the 2015 event will head east on East Main Street past the university monument and new “Mixer on Main” parade-watching event on the President’s Lawn. The parade will start at 11 a.m. Saturday, Oct. 3. (MTSU photos by News and Media Relations)

The Office of Alumni Relations’ former “Mixer on Middle” parade-watching party will now be known as the “Mixer on Main” and will shift to the south corner of the President’s Lawn, near the monument at East Main Street and Old Main Circle, for its 1o:30 a.m. start.

“We’re excited about it being in a different location, which allows more space for the celebratory crowd, and will continue the tradition of popular ‘Mixer’ festivities — souvenir photos, the announcers and DJ and a lot of blue and white balloons,” King said.

Kickoff for the MTSU-Vanderbilt game will be 6 p.m. in Floyd Stadium.

The street sign at the intersection of East Main Street and Old Main Circle is next to the new location for the “Mixer on Main” MTSU Homecoming Parade-watching party, which starts at 10:30 a.m. Saturday, Oct. 3, on the lawn south of the President’s Residence.