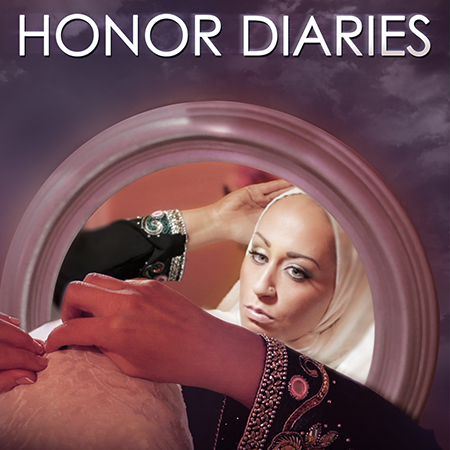 Inspired by the Arab Spring, women are beginning to speak out about an ongoing legacy of oppression.

Click on the poster to watch the “Honor Diaries” trailer before the April 23 screening at MTSU.

“Honor Diaries,” a documentary that expresses the women’s anguish, will be screened at 7 p.m. Wednesday, April 23, in the State Farm Lecture Hall of MTSU’s Business and Aerospace Building.

The screening is free and open to the public.

The hourlong film focuses on so-called “honor violence,” which targets mostly women who have violated cultural beliefs and behaviors, therefore “dishonoring” their families.

Some rape victims have been murdered because they, not their attackers, are considered to have brought disgrace on their families.

Honor violence is most widely reported in the Middle East and south Asia, and it also has been reported in Canada, France, Germany, Great Britain, Italy, India, Sweden and the United States.

Victims have been shot, stoned, burned, buried alive, strangled, smothered or stabbed by their husbands, fathers or brothers in the name of restoring “honor.” Other forms of honor violence documented in the film include forced marriage and female genital mutilation.

“This film is a wonderful format to encourage and inspire some discussion regarding this very important global issue,” said Dr. David Schmidt, vice provost for international affairs.

“It has already created a discussion nationally, and I am pleased we have the opportunity to screen this film at MTSU.”

According to the United Nations, there are 5,000 honor killings reported around the world every year.

A report by the Parliamentary Assembly of the Council of Europe says honor violence is based on the belief that women are the property of their male relatives. Men are rarely penalized, and in the rare situations when police do intervene, the men receive reduced sentences.

This event is presented by the MTSU Office of International Affairs. A searchable campus map with parking details is available at http://tinyurl.com/MTSUParkingMap13-14.