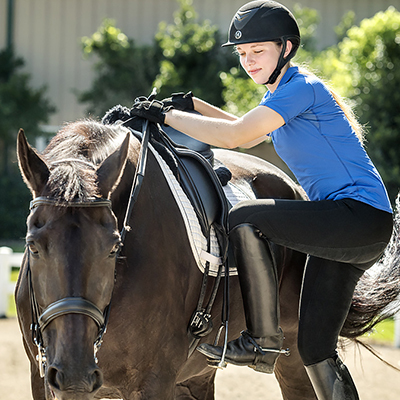 Meghan Miller plans to trust her riding ability and her horse named Remington as she competes in the Adequan/FEI North American Junior and Young Rider Championships starting Tuesday, July 26.

The MTSU junior integrated studies major, Honors College Buchanan Fellow and Murfreesboro resident will compete against U.S., Canadian and Mexican riders in the event at Colorado Horse Park in Parker, Colorado, about 25 miles southeast of Denver.

The event is the premier equestrian competition in North America for junior and young riders age 14 to 21. It is presented by the Westchester, New York-based Gotham North farm and home owned by professional equestrian, philanthropist and young adult novelist Georgina Bloomberg.

Young equestrians compete for team and individual FEI medals in the three Olympic equestrian disciplines of show jumping, dressage, eventing, the Para-Olympic discipline of para-dressage and the FEI World Equestrian Games disciplines of reining and endurance. The competition is run under the rules of the Federation Equestre Internationale, or FEI, the international governing body for equestrian sport and the only FEI championship held annually on this continent.

It will be Miller’s first and last time to compete in the North American Junior and Young Rider Championships.

“For both ‘Remy’ and myself, it’s our first international competition,” said Miller, 20, who competes in dressage, a system that develops strength, balance and grace in the horse and clarifies communication between horse and rider.

“I’m just really hoping to not be too nervous and to get through it and just ride like I do at home. We’ve been training really well. I hope I can carry that on there.”

As for “Remy,” Miller said the 16-year-old Hanoverian bred in Germany and born in the United States is “very reliable at shows, so I’m expecting him to be pretty chilled as usual and hoping he will come out looking good.”

Miller said Remy, who weighs about 1,500 pounds, has overcome a sinus infection in the past month.

“He had some soreness. He needed time to recover,” Miller said. “I’m excited about him peaking at the competition.”

Miller’s ambitions include riding in the Olympics and becoming a trainer, teacher and professional rider.

“Meghan always reaches for new opportunities, and I am not surprised that she has accomplished so much in her two years at MTSU,” Clippard added. “She has great diplomatic skills and does well working with faculty, staff and other students. Meghan is very focused and her interest in working with horses is one of her many talents. As a Buchanan Scholar, Meghan represents the best of MTSU and the Honors College.”

Miller’s minors at MTSU include psychology and agriculture with an emphasis in horse science. Her Buchanan scholarship is the highest award given to an entering MTSU freshman. It is named in honor of the university’s Nobel Prize-winning alumnus, the late Dr. James M. Buchanan.

MTSU Honors College Buchanan scholar Meghan Miller of Murfreesboro applies braces to the legs of her competition horse, Remington, before a recent workout with him.