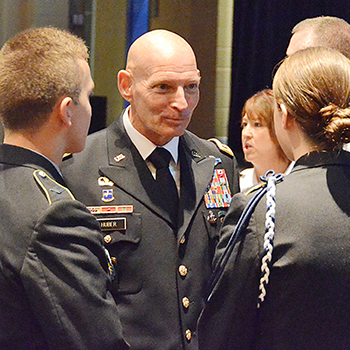 While his grandfather fought in World War I and his father in World War II, retired U.S. Army Lt. Gen. Keith Huber said he was the only person in his family to make the military a career.

The West Point graduate and Green Beret served 38 years before retiring in 2013 as a three-star general after having held leadership positions in combat zones ranging from the Persian Gulf to Kosovo to Afghanistan.

Retired Lt. Gen. Keith Huber spoke about leadership and sacrifice to JROTC cadets and other students from Blackman High School Nov. 12 inside the school’s auditorium. Huber is now senior adviser for veterans and leadership initiatives at MTSU. (MTSU photos by Jimmy Hart)

Now senior adviser for veterans and leadership initiatives at MTSU, Huber spoke to several hundred Blackman High School students Nov. 12 about the sacrifices made by those serving in the military and their families and the leadership required to keep the nation safe.

Huber recalled that while serving two years in Afghanistan, he saw his family “less than three weeks” as he commanded thousands of soldiers and oversaw a budget of more than $900 million.

While being away from his wife and children was hard, he said he took some solace in knowing that he was involved in an effort to protect his then 5-year-old daughter from “the bad guys” even as she wondered when dad would get to come home.

“Unfortunately, there is an unlimited supply of evil people who would steal our freedoms and harm our families,” Huber told the students. “That is the reality of the world that you will enter as leaders of the world, regardless of the attire that you wear.”

Students attending the special assembly came from the school’s Junior Reserved Officers Training Corps, or JROTC program, as well as from its Collegiate Academy — an academic partnership started this year with MTSU — and from among Blackman’s National Honor Society students.

She said Huber seemed a perfect match to talk to the school’s large JROTC group as well as other students interested in improving their leadership skills.

His visit came a day after the nation’s annual observance of Veterans Day.

“He made so many points that were absolutely pertinent to our kids: doing the right things, which are sometimes really hard decisions; continuing to work when things are hard and not giving up,” Justus said.

She was also struck by Huber’s “reminder” about an overreliance on modern technology these days to communicate electronically through emails, text and social media.

“Leadership is communication, and it’s face-to-face communication. We all need to be reminded of that,” Justus said. “I was so glad my students were there listening.”

Blackman junior and JROTC cadet Kyle Dallas was among the 200 cadets in the audience. Dallas, who plans to continue his ROTC training in college, perhaps at MTSU, said he hopes to get commissioned as a second lieutenant before moving into Special Forces and on a career track that’s similar to Huber’s.

“I’ve never seen a three-star general in my life, and when I saw him in here I was very attentive,” Dallas said. “He was very candid and straightforward with all of his comments. I really liked it.”