Got a week? Learn a foreign la.. 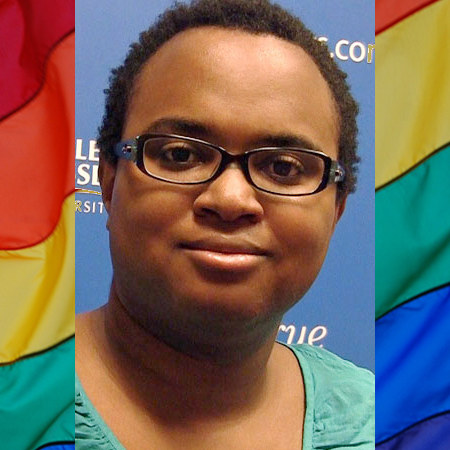 The timely topic of transgender rights was the focus of a recent “MTSU On the Record” radio program.

Host Gina Logue’s interview with MTSU alumna Morgan Hunlen first aired May 30 on WMOT-FM (89.5 and www.wmot.org ). You can listen to their conversation below.

Hunlen, who graduated May 7 with a Bachelor of Science degree in aerospace and with honors from MTSU’s University Honors College, majored in the professional pilot program and minored in Japanese. She was born male and began her transition to becoming a woman while still an MTSU student.

This sign marks one of MTSU’s all-gender/family restrooms on campus, available for students, faculty, staff and guests. In 2001, MTSU became the first public college or university in Tennessee to include sexual orientation in its nondiscrimination policy. MTSU added gender identity to that policy in 2009.

In the interview, Hunlen offers her reaction to U.S. Attorney General Loretta Lynch’s May 9 announcement to challenge a North Carolina law that requires people to use public restrooms according to their sex at birth.

“This is a case that is now going to have national implications for all the bathroom laws … across the nation,” said Hunlen.

“I feel like a victory, at this stage, could pave the way for more trans-inclusive policies to come down the pipeline, either from Congress or from our courts.”

On the upcoming radio show, Hunlen also discusses the impact of the gay rights movement on transgender rights and her personal gender identity journey.

Another member of the MTSU community, history professor Dr. Marisa Richmond, was confirmed as a member of the Metro Human Rights Commission by a unanimous voice vote May 19.

Nashville Mayor Megan Barry appointed Richmond, making her the first transgender person in the state named to a local government board or commission, according to the Tennessee Transgender Political Coalition.