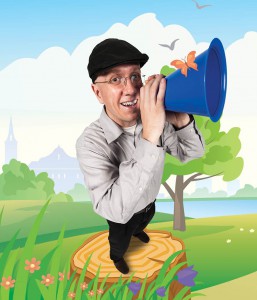 Michael Hammock employs an uncommon curriculum in the teaching of economics

Don’t count MTSU Honors professor Michael Hammock among the stuffy types unwilling to think outside the box in order to make a lesson stick. The 30-something Hammock is as likely to use an episode of cult cartoon Beavis and Butt-head as he is a classic Dr. Seuss tale to teach students the relevance of economics in their daily lives.

The Forest or the Trees?

Hammock’s use of Seuss’s The Lorax to explore policy insights on environmental economics was first described in the Journal of Private Enterprise. The coauthored work drew national attention earlier this year when the Lorax tale reached the big screen in a full-length movie adaptation animated by Universal Pictures.

In the Seuss story, a character called the Once-ler cuts down all the trees to make “Thneeds.” The Lorax—a creature who speaks for the trees—warns the Once-ler of the consequences but to no avail.

Before long, the once-beautiful land is barren, and the Once-ler is unable to make any more Thneeds and must close his factory.

The tale is supposed to be a warning that people should take care of the environment “lest we find ourselves impoverished,” Hammock says. But as Hammock explains to students, the story of the Lorax is in fact not a very useful environmental warning.

“Unlike Once-ler, most businesses are not keen on driving themselves out of business.

They don’t like large losses or suddenly finding themselves suffering huge negative profits. It doesn’t really make a lot of sense that they’ll destroy the only thing making them lots of money, at least not something they own,” Hammock explains.

“What businesses usually try to do if they own something is take care of it and maximize its profitability. Businesses that manage large stocks of resources like forests, they try to maintain it, and plant new trees after they cut trees down. So the lesson we can glean here is that resources, when they are privately owned, tend not to be destroyed.”

Hammock, then, uses the story to stress the need for environmental policy that gives big companies incentives to be greener in their operations in cases where private property ownership is not an option.

“For instance, it is impossible to allocate property rights for the air. You can’t say this block of air is mine because it can move and become yours. In other words, there’s no way to protect my air from your pollution. Solutions could be a carbon tax or pollution tax. If you want to produce pollution, okay, but you have to pay something for it, and that becomes a disincentive to pollute.”

Given Hammock’s willingness to use children’s literature to illustrate economics concepts, it should come as no surprise that he also employs animation—his own—in his coursework.

Though admittedly his animation is not museum-quality art (much of it employs stick figures), Hammock’s work does introduce action and motion into his presentations.

“It breaks up classroom monotony a bit,” he says, “and gets a little humor in there as well.”

Hammock taught his first Honors Buchanan Fellows class in the spring of 2012. He says he enjoyed it immensely.

“Students are just of the highest caliber. They like talking about subjects outside of class. They like to do additional reading if it strikes their fancy. They’re just great fun to teach.”

Hammock first discovered that he enjoyed teaching economics in 1995 as an undergrad at Berry College while helping one of his professors teach a course to M.B.A. students. He went on to receive a master’s in economics from Texas A&M University in 1998, and after taking a year off from school to work in a computer store and get married, he and his wife enrolled in Ph.D. programs at Emory University—she studied neuroscience, and he studied economics.

In 2006, Hammock began teaching at Rhodes College in Memphis, where he spent the next three years. After Rhodes, the couple moved to Nashville and became foster parents.

At MTSU, Hammock received a grant to fund economics speakers for undergraduate audiences. So far, he has secured big hitters such as Bryan Caplan (economist and adjunct scholar at the Cato Institute) and David Figlio (with the Institute for Policy Research at Northwestern University). Hammock is working on bringing in similarly high-profile speakers for the 2012–2013 school year.

Hammock’s research has been in several different areas but mostly in the young field of information security economics (the application of economics to protecting data) and in the teaching of economics. In the past few years, he has published papers on consumer willingness to pay more to shop websites that offer greater security and privacy and on environmental economics and law and economics. He is now working on a video series for introductory economics classes, a textbook on using the Maxima computer algebra system for economics and teaching, and a large literature review on the economics of information security.