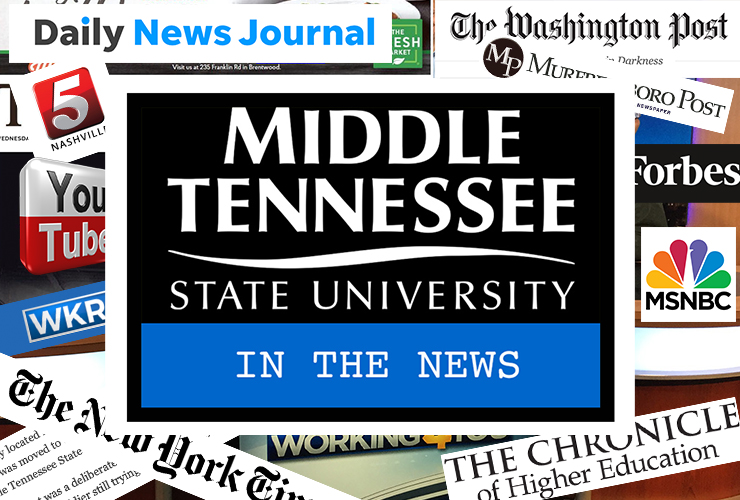 MTSU faculty and staff recently responded to news agencies seeking answers on a variety of topics including “taking a knee” during the national anthem, the importance of public access to public records, a bomber’s motivations, the Grammy Awards and mask-wearing at public events, among others.

• Dr. Katie Foss, a professor of media studies, opined that the way a vaccine campaign is named could help determine whether it is successful in an article in the March 2 edition of The Conversation. Her views can be accessed here.

Foss commented on how marginalized groups might have felt consuming some of the media that are coming under fire today, including certain Dr. Seuss books, in a March 16 article at www.nj.com. Her remarks can be read here.

• Dr. John Vile, dean of the University Honors College and a political scientist, criticized Tennessee state lawmakers for insisting that state universities prohibit student-athletes from “taking a knee” during the National Anthem at sporting events in a column published March 5 in The Daily News Journal in Murfreesboro. His commentary is available here.

Vile said that the children of the Duke and Duchess of Sussex are eligible to run for president of the United States in a March 9 story in USA Today. His views can be read here.

• Rick Stockstill, head football coach, and Chris Massaro, athletic director, explained why Brent Stockstill was hired as an assistant football coach even though he is the head coach’s son in a March 3 report on WTVF-TV in Nashville. The video and transcript can be seen here.

• Ken Paulson, director of the Free Speech Center, said a bill in the Tennessee General Assembly to force news agencies to follow up on the outcomes of civil and criminal cases if subjects mentioned in the news stories insist upon it is unconstitutional. His comments, which were published March 6 in the Chattanooga Times Free Press, can be read here.

Paulson also explained why a Pickens County, Georgia, case is a classic example of a lawsuit designed to stifle free speech in a March 6 story originally published in the Washington Post and reprinted by www.sfgate.com. The article is available here.

Paulson penned an editorial encouraging citizens to demand government accountability by searching public records. The column, which was published March 8 in the Athens (Ohio) Messenger, can be accessed here.

Paulson wrote a column stating that “cancel culture” is nothing new and is not only fueled by liberals. The column was published March 10 by www.usatoday.com and can be read here.

• Deborah Wagnon, a professor of recording industry, noted in a March 5 story in the Boston Globe that most celebrities’ work does not create enormous sums of wealth after their deaths. Her comments can be accessed here.

• Dr. John Haffner, an associate professor of agriculture and a veterinarian, discussed his parasite control protocol for MTSU’s 50-horse herd in a March 8 article in The Horse magazine. His comments are available here.

• Dr. Andrei Korobkov, a professor of political science and international relations, delivered a presentation on “The COVID-19 Pandemic and Its Transformational Impact on the RF Politics and Society” at the International Studies Association’s March 9 virtual discussion of “COVID-19 As Global Social Actor.” The video can be seen here.

• Dr. Derek Frisby, a faculty coordinator in the Office of International Affairs and associate professor in the Global Studies program, provided testimony before the Tennessee Historical Commission prior to its vote on removing a bust of Nathan Bedford Forrest from the state Capitol building. Quotes from his testimony can be found in a March 10 story in the Nashville Scene, which can be accessed here.

• Ron Malone, assistant vice president of events and transportation services, said MTSU and the TSSAA discussed the possibility of removing fans from the state high school girls’ basketball tournament at Murphy Center if mask wearing did not improve. His comments were part of a March 11 report in The Tennessean. The story can be read here.

• John Merchant, chair of the Department of Recording Industry, hailed the number of members of the MTSU community who have been nominees and winners at the Grammy Awards in a March 14 report by WTVF-TV in Nashville. The video and transcript are available here.

• Dr. William Langston, a professor of psychology, found Anthony Warner’s decision to warn the public about the bomb he planted in downtown Nashville on Christmas Day 2020 counterintuitive. Langston’s remarks are in a March 15 report by WSMV-TV in Nashville. The video and transcript can be accessed here.

• Dr. Daniel Smith, director of the Political Economy Research Institute and an associate professor of economics, penned an opinion piece on competition for trash collection services that was posted March 16 by the American Institute for Economic Research. His essay can be read here.