Shelby West is an MTSU transfer student from West Tennessee. She made a major decision after the fall semester to switch majors, from science to agriculture, and works in retail. To help ease her spring academic load, she took a Winter Session course.

Madison Berry plans to graduate in December. She wants to take fewer hours in the fall to focus on graduate school, potential jobs and a possible relocation. A Winter Session class will help ease the load.

MTSU offered its inaugural Winter Session, which ran from Dec. 21 to Jan. 21, for students like West, Berry and hundreds of others. Early indications reveal it is a hit with both them and faculty. 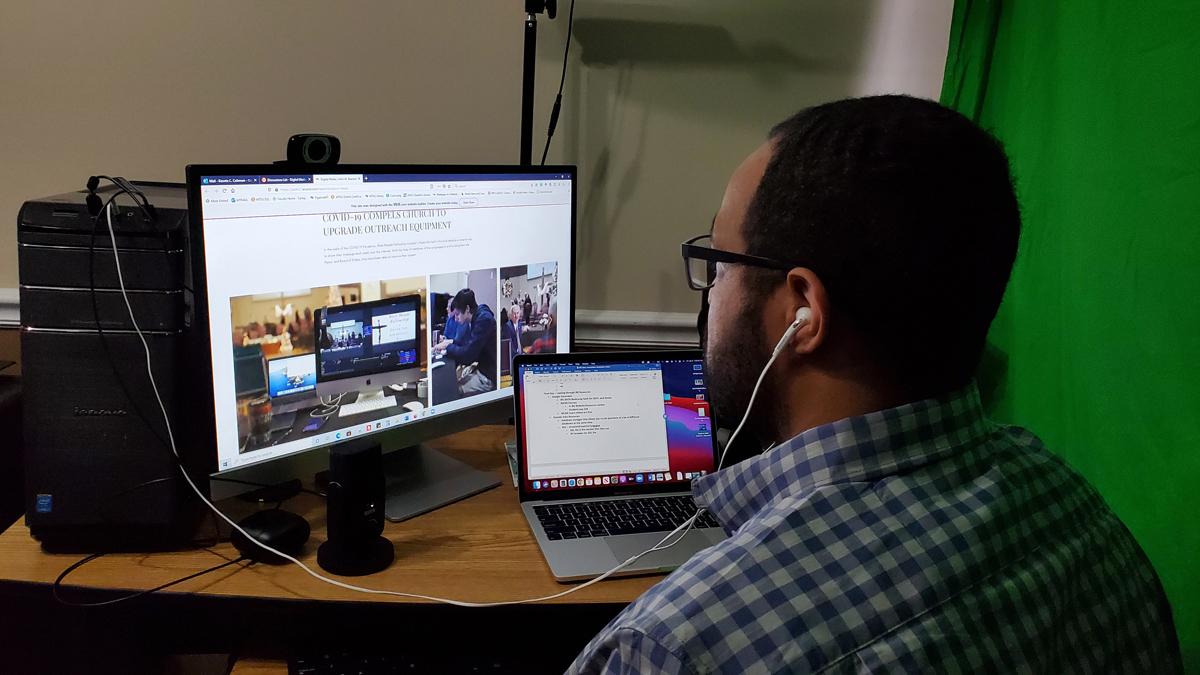 Keonte Coleman, assistant professor in the MTSU School of Journalism and Strategic Media, taught a digital media skills class during the inaugural Winter Session. By the end of the month-long term, students produced a photo essay, infographic, audio story, social media video and website portfolio to display their work in class, plus other material for future employers. (MTSU photo submitted by Keonte Coleman)

A group effort between Academic Affairs and Student Affairs led to the launch of Winter Session — another way for students to receive credit toward graduation by taking advantage of the compressed course term.

“Winter Session has been a huge success. Hundreds of students are being served, and the session has proceeded without a hitch,” said Rick Sluder, vice provost for Student Success and dean of University College. “The addition of this session enables students to stay on track and finish faster.”

Sluder said he wants “to express appreciation to faculty and (department) chairs” in addition to the others “who made this a highly successful initiative. The inaugural Winter Session would not have been possible without their efforts.”

Academic Affairs’ Peter Cunningham, who retired in 2020, Winter Session Coordinator Jana Hinz, 2019-20 Faculty Senate President Justin Gardner and MT One Stop Director Tyler Henson were among many who made it happen.

• More than 800 students — double the number projected — were enrolled in Winter Session.

• 41 online courses were offered, with an average enrollment of 20 students each.

• Sluder calls it “an institutionwide initiative,” with 20 departments across all seven academic colleges offering courses.

“It seems clear there is a high level of student demand for Winter Session courses, something we look to build upon in future sessions,” Sluder said.

West, 20, a junior from Medina, Tennessee, and a Dyersburg State Community College transfer with a 3.0 GPA, is now majoring in agribusiness (“I realized science was not my thing,” she said.) and pursuing a minor in business administration.

“Winter Session has actually gone easier and nowhere near as stressful for me (as) I expected,” said West, who spent a week at home taking the “Principles of Agricultural Economics” course and visiting with family during the Christmas holiday before returning to Murfreesboro to finish the class. “Since it is a shorter term, I expected it to feel rushed or crammed, but it actually doesn’t feel much different from a regular term class.”

“It’s smart to take the quizzes before the exam,” she said. “It’s nice to know that if I happen to forget a quiz, I have until the end of the semester to submit it. He has also given us five attempts on each quiz, which is very gracious of him and very helpful for me as a student.”

Gardner also has an MT Engage (enhancing student academic engagement) project “that we have a week to complete, which seems like an ample time period for any project,” West said.
West said for anyone with free time during winter break, she “would highly recommend taking a Winter Session class, especially since it might help some students get ahead or simply not fall behind.”

Berry, 21, of Bell Buckle, Tennessee, is a math major with minors in computer and data science. She took professor and Department of Economics and Finance Chair Keith Gamble’s “Personal Financial Planning” class in Winter Session to lessen her course load next fall.

“It’s a great class,” said Berry, who has a 3.5 GPA. “The content is really manageable and presented in a really organized fashion. Dr. Gamble’s been great; he communicates well.”

Berry works 30 hours a week as a baker for Crumbl Cookies at The Avenue to help compensate for Winter Session tuition costs.

A sampling of work submitted by the digital media skills class during the inaugural Winter Session from Dec. 21 to Jan. 21. (Graphic by Keonte Coleman)

A sampling of faculty members’ perception of Winter Session …

• Gamble: “Winter Session has been a big success. We have many students who are motivated to graduate a semester early or even a year in advance. … I hope the university will build on it by offering additional and varied courses next winter so every student has an opportunity to make additional progress toward an early graduation.”

• Gardner: “I worked closely with Peter Cunningham on Winter Session. We were the two biggest cheerleaders behind the idea. … The logistics of creating a winter term were very complex; getting it all set up was a real team effort from support staff in Academic Affairs and Student Affairs.”

“I personally championed the idea because I like giving students options. A student that has fallen behind can catch up. … At least half of my students this semester are pre-vet. A lot of them grind through back-to-back 18-hour semesters. If they take my class in the winter, they can spread the workload out and make the spring a little bit easier, and give them time to study organic chemistry.”

• Keonte Coleman, assistant professor in the School of Journalism and Strategic Media, taught a digital media skills class: “Students have done a wonderful job so far of acclimating to the fast pace. The level of work that I received for the first set of media assignments compares favorably to what I get during the typical semester-long course. I think the compressed time gets the students closer to real-world journalism deadlines, so that is an added benefit.”

When finished, students will have produced a photo essay, infographic, audio story, social media video and website portfolio to display their work in class, plus other material for future employers. Coleman provided a one-hour introduction video.

• Ken Blake, journalism professor and director of the Office of Communication Research in the College of Media and Entertainment, taught media writing: “I can tell from the work the students are turning in they are engaging with the course readings and other materials, and the quality of the work has been exceptional. Perhaps the lack of distractions from other courses has helped the students truly zero in on what they are learning. … The term’s five-week duration allows plenty of time to spread out the required work, yet still provide a meaningful amount of instruction.”

A “Spreadsheet Basics for Journalists” that Blake’s students worked through as part of the course can be found here and on his website (www.drkblake.com) 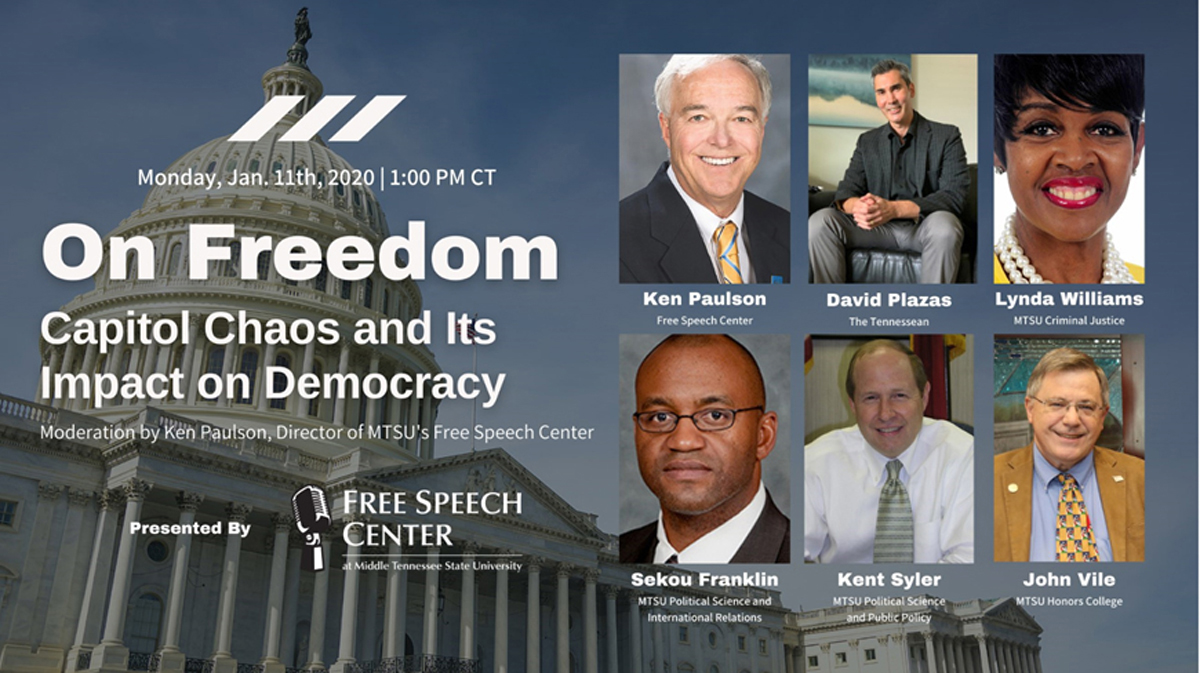 • Political science professor Kent Syler taught introduction to American politics: “The winter class is going very well. Most students are keeping up with the work. I have had two optional Zoom get-togethers and promoted the Jan. 11 webinar (‘On Freedom/Capitol Chaos and Its Impact on Democracy’) I participated in with Ken Paulson (director of MTSU’s Free Speech Center) and others (The Tennessean’s Dave Plazas and MTSU experts John Vile, Lynda Williams and Sekou Franklin). It has been an incredible time to be taking introduction to American politics.”

“We had a couple of textbook issues early in the term and the Nashville (Christmas day) bombing created some internet problems, but those students were able to catch up.”