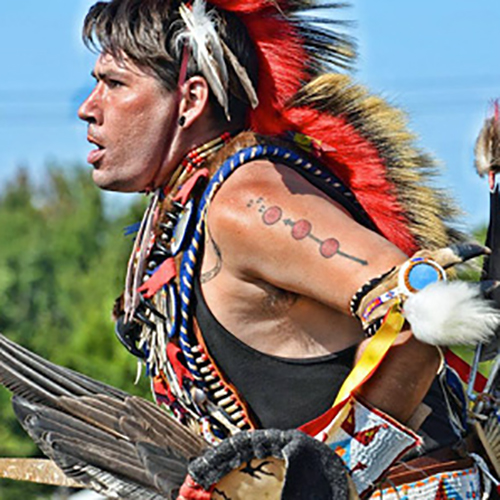 For the first time in almost a decade, MTSU will host a three-day powwow as a tribute to indigenous peoples.

The Native American Student Association will present the Indigenous Peoples Powwow Feb. 24-26 at the Tennessee Livestock Center, 1720 Greenland Drive in Murfreesboro. A printable campus parking map is available at http://tinyurl.com/MTSUParkingMap.

Arts and crafts, dancing, music, storytelling and vendors selling authentic handmade Native American items will be part of the celebration, which will begin at 4 p.m. Friday, Feb. 24, with a fry bread cook-off.

At 5 p.m., representatives of various tribes will participate in a forum about issues facing Native Americans today.

“We’re talking about the successes native people have had in their communities and the struggles they face as they look for a successful route to addressing them,” said Melissa Shelby, the event’s primary organizer and a graduate student majoring in biochemistry.

Social dances and a hand drum competition will round out Friday’s activities at the livestock center. Renowned blues artist Butch Mudbone of the Seneca tribe will perform at an after-hours event at 9 p.m. Friday at Jazzmatazz, 1824 Old Fort Parkway in Murfreesboro.

The agenda for Saturday, Feb. 25, will start at 9 a.m. as vendors offer their silverwork, drums, flutes, hides, beadwork, woodcarvings, pottery and basketry for sale.

Niles Aseret, a Navajo born and reared on an Arizona reservation, will speak at 11:15 a.m. Saturday on his campaign for a National Native Code Talker Day to pay tribute to the individuals who used their knowledge of Native American languages to transmit messages for the Allied forces during World War II.

Throughout the powwow, various dancers will display their talents in competitions. On display will be social dances and special dances including the Hoop Dance, the Chicken Dance and a special dance honoring those who walked the infamous Trail of Tears, the forcible removal of Native Americans from their ancestral homelands between 1830 and 1850.

“I watched many of these youth who were dancing at 6 years and 12 years, and now these people are bringing their 2-year-olds and their 6-year-olds to this powwow,” said Shelby.

General admission for Friday’s activities is $4. Admission to Butch Mudbone’s performance at Jazzmatazz is $8.

Admission for Saturday and Sunday is $7 general admission, $5 for MTSU students and employees and seniors. Active-duty and retired military personnel, emergency medical technicians, firefighters and police officers, as well as children under 6 years of age, will be admitted free of charge.

For more information, contact Shelby at mds2e@mtmail.mtsu.edu. To make a financial contribution, go to https://www.gofundme.com/mtsu-indigenous-peoples-powwow.