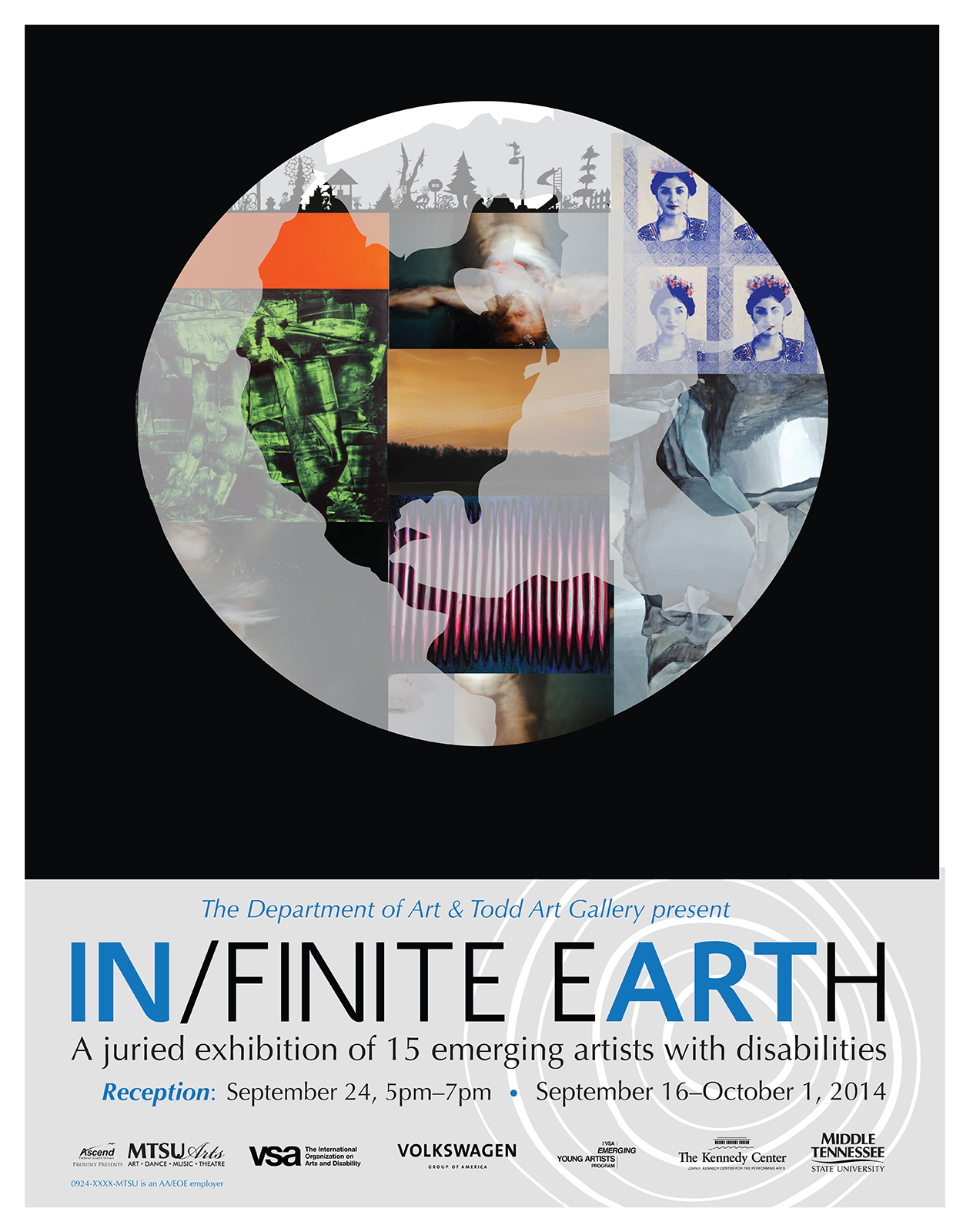 The university is one of the stops on a national artists’ tour organized by VSA, the international organization on arts and disabilities founded in 1974 by Ambassador Jean Kennedy Smith and formerly known as Very Special Arts.

Now in its 12th year, the VSA “Emerging Artist Program” merged with the Kennedy Center for the Performing Arts in 2011 to expand its services.

The MTSU Arts-sponsored exhibit showcases works by 15 artists between 16 and 25 years old who are living with disabilities. VSA works to boost their emerging careers and provide the public with a chance to see these juried works of art.

MTSU’s Todd Art Gallery is open from 8:30 a.m. to 4:30 p.m. Monday through Friday and is closed on weekends and state and university holidays.

A free public reception also is set for Wednesday, Sept. 24, at the Todd Gallery from 5 to 7 p.m.

“The artists showcased in ‘In/Finite Earth’ do not allow their disabilities to handicap their lives but rather embrace their differences and employ them through to their art,” Todd Art Gallery Director Eric Snyder said of the exhibit.

“They incorporate their thoughts, feelings, character and style through their improvisations and manipulations. These aspects build matchless, creative techniques based on a wide variety of unique, aesthetic values such as symmetrical and geometrical design, curvature, contrast, values, textures and intricate details which ultimately aid in conveying a portal of communication through their works between them and their audience.”

“The ‘In/finite Earth’ project is an amazing opportunity for young adults with disabilities to pursue their dreams of a career in the arts and demonstrate their outstanding talents,” said Lori Kissinger, executive director of VSA Tennessee and an organizational communications instructor at MTSU.

“VSA Tennessee is extremely pleased to see this exhibit come to Tennessee, especially since one of the participants in this exhibition is from Tennessee. Middle Tennessee State University was the perfect location for the exhibit due to its location in the state and its commitment to students with disabilities. VSA Tennessee will be working closely with MTSU throughout 2014-15 due to the celebration of the 40th anniversary of VSA and the 25th anniversary of the Americans with Disabilities Act. This exhibition is the perfect way to kick off what is going to be exceptional year of partnerships and programming.”

In addition to support from MTSU Arts, the John F. Kennedy Center, and VSA, the Volkswagen Group of America provided funding for the “In/finite Earth” exhibit. You can learn more about the exhibit here.

For more information about MTSU Arts, which presents a full slate of art, theatre and music offerings at the university each year, visit www.mtsuarts.com.

For more information, including parking and directions, contact Snyder at 615-898-5653 or eric.snyder@mtsu.edu or visit www.mtsu.edu/art. You also can find a campus parking map at http://tinyurl.com/MTSUParkingMap14-15.

Denver, Colorado-based artist AJ Kiel’s “Mix-Up,” an acrylic painting on canvas, is part of a special national exhibit underway through Oct. 1 at MTSU’s Todd Art Gallery. “In/finite Earth” is presented by VSA and the Kennedy Center for the Performing Arts to showcase a program for emerging artists with disabilities.

Philadelphia-based artist Sarah Langsam’s “Rings on Rings on Rings,” created from wood, epoxy resin and fiberglass, is part of a special national exhibit underway through Oct. 1 at MTSU’s Todd Art Gallery. Langsam received a first-prize award for her work in the project.