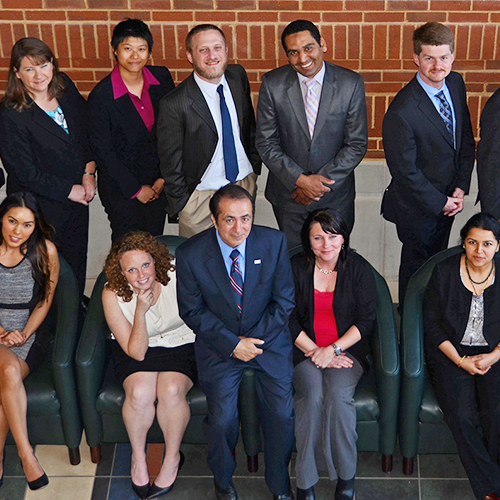 Brigette Thompson called it a “wonderful experience.” For David O’Brien, it was “fantastic.”

Thompson and O’Brien were two of 14 MTSU Master of Science in Professional Science students who served internships with Tennessee companies for parts or all of the past two semesters and are degree candidates for the Saturday, May 10, commencement ceremonies in Murphy Center.

Participants in the Master of Science in Professional Science program at MTSU gather for a photo after their presentation May 1 in the Cason-Kennedy Nursing Building. They are shown with program director Saeed Foroudastan, who is seated at center left. (MTSU photo by News and Media Relations)

The program, commonly called the professional science masters or PSM, is an award-winning two-year master’s degree in the sciences, technology, engineering and mathematics, or STEM, disciplines that equips students for work in public and private business and academia.

Offered in conjunction with the Alfred P. Sloan Foundation, the interdisciplinary program is a partnership among the MTSU Colleges of Basic and Applied Sciences, Behavioral and Health Sciences, and Liberal Arts, and the Jones College of Business. To learn more, visit www.mtsu.edu/msps/about.php.

Thompson, a Murfreesboro native, said she was able to work on several projects at the same time — one in science and one in business — with Brentwood, Tennessee-based Encapsula NanoSciences that “exemplified the interdisciplinary properties of the MSPS program,” she said.

“I was able to learn coding and marketing, which, as a biology major, you don’t experience,” the biotechnology student said, adding that she also was able “to learn about the molecule delivery system used for research.”

O’Brien drove 360 miles round trip from Murfreesboro to Knoxville, Tennessee, two days a week to fulfill his Siemens Healthcare Molecular Imaging engineering management commitment, which ends in mid-May. His schedule often included a quick return to campus in time for a Tuesday night class.

“This program is very challenging,” said O’Brien, a Jackson, Mississippi, native now living in Murfreesboro. “You have to be willing to grow and be willing to learn.”

While serving in the internship, O’Brien was a full-time graduate student and graduate teaching assistant.

All of the students made presentations May 1 in MTSU’s Cason-Kennedy Nursing Building. Along with Thompson and O’Brien, they are:

Griffin said she will have an interview with the Centers for Disease Control and Prevention in Atlanta, all based on her internship with the Tennessee Department of Health this semester.

Various corporate mentors and members of the program’s advisory board attended the presentations.

MTSU launched the program in 2005 under the direction of Saeed Foroudastan, professor of engineering technology and associate dean of the College of Basic and Applied Sciences. It has an outstanding retention rate and saw a large increase in the graduation rate between 2005 and 2009. In 2010, the Tennessee Board of Regents honored the program with the Academic Excellence Award.