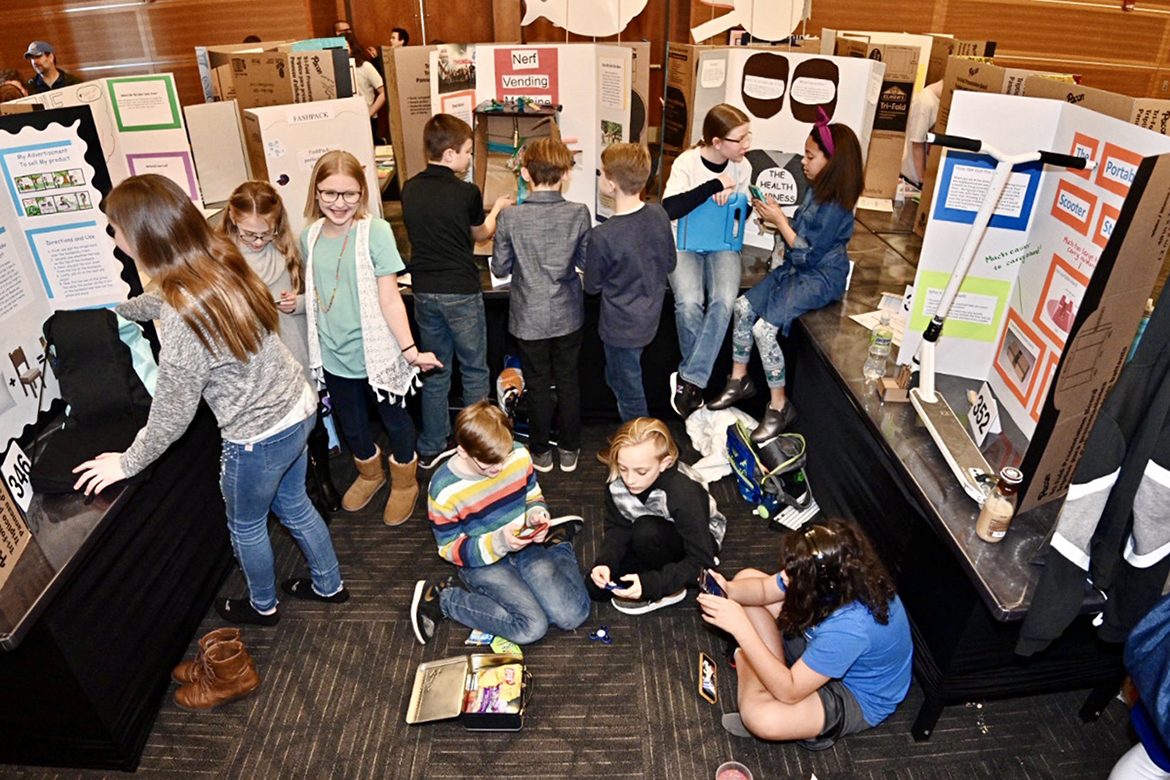 Last fall, at their kitchen tables and in their backyards, garages and classrooms, 828 Middle Tennessee youngsters saw 426 different needs — for a learning game, or a way to make life easier — and devised 426 different solutions.

At MTSU’s 28th annual Invention Convention, those fourth-, fifth- and sixth-grade students proudly put those solutions to work, explaining and demonstrating them for fascinated judges, teachers, friends and passers-by and earning certificates, ribbons, trophies and praise for their creativity and ingenuity.

“I want to just say one more time how proud I am of you,” convention director Tracey Huddleston, a professor in MTSU’s Department of Elementary and Special Education, told the excited young inventors.

“Each of you came today with an invention that the world didn’t know about until you created it — until you invented it. You should be very proud of yourselves.” 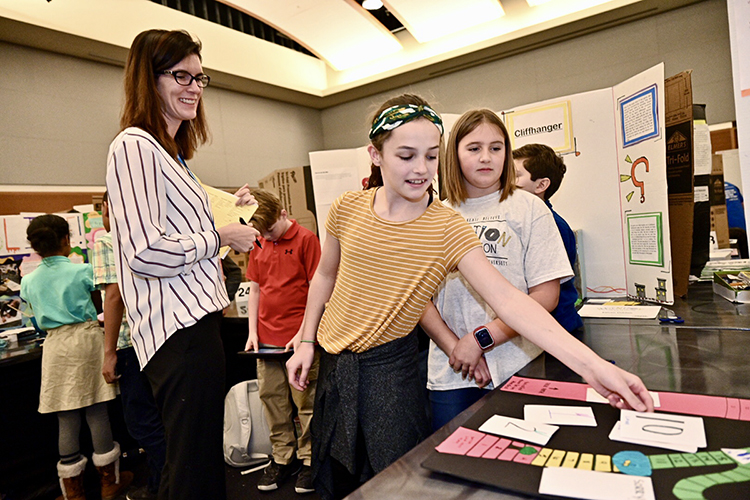 “Just four years ago I was just like y’all. I had a problem and knew I needed to find a simple solution,” now-eighth grader Maddox Prichard of Gallatin said of the tool he crafted to help his family with gardening and landscaping.

“My idea is simple but it helps people every day. Sometimes the best inventions are just little modifications to already great ideas.”

Each year, the students use a maximum of $25 to create and present an invention from one of two categories, “Games” or “Make Life Easier.” This year’s group was so large that it overflowed the MTSU Student Union’s massive ballroom, easing the fourth-grade inventors into a nearby space with room for them to demonstrate.

Aiden Curtis, a fifth grader at Watertown Elementary, developed the “Quad Math Racing” game to “help kids ages 5-8 learn math facts in a fun way.” He got the idea when some of his younger cousins were beginning to learn division in their math classes.

“I thought it might be helpful if they were playing a game,” he explained.

The players answer simple division questions and “race” around a track by moving an allowed number of spaces, and the first player to circle the track three times wins. The success led, Curtis, age 11, to create his Reading+Learning Game Company in 2019. 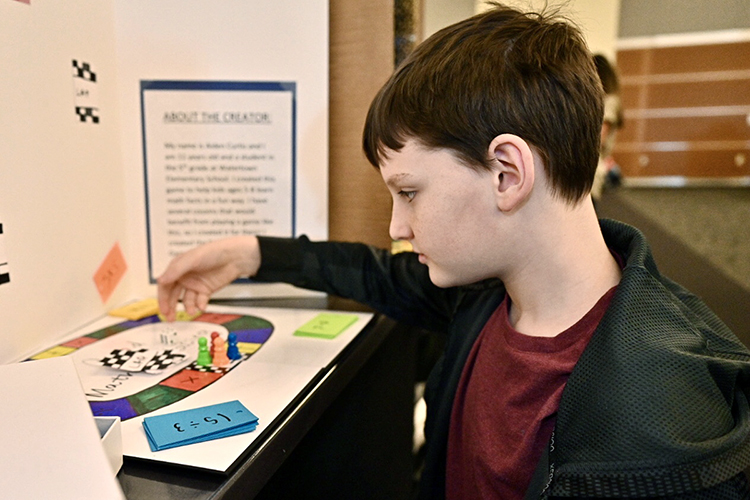 His Watertown schoolmates Kegan Beadle and Koen Guess used their interests in history, science and video games to create “Gladius Arena,” a math game that allows individual players or teams to battle for supremacy as gladiators.

“There are varying strengths of blocks and attacks,” said Guess. “The last player, or team, standing is the winner.”

“We originally had the idea about a game about ‘battle gods’ or mythical entities, but we scrapped that idea and chose gladiators,” added Beadle.

“Once it’s frozen, you can take it out, store it, then peel it off the wax paper and enjoy it,” she explained, swiftly demonstrating her idea to make life easier.

A Siegel Elementary trio from Murfreesboro won multiple top prizes for their invention to help put the brakes on the bane of every shopper’s existence: runaway shopping carts in the parking lot.

Gabe Cops, Asher Evans and Tripp Houston used a telescoping pipe to create their “Shopper Stopper,” even seeking advice from nearby grocery- and hardware-store experts to perfect their deceptively simple invention.

They took first place in their fifth-grade “Make Life Easier” category, won the event’s “Eagle Award” for best invention presented by longtime education professor Wil Clouse of the Clouse-Elrod Foundation, and earned an invitation to the national Invention Convention June 3-5 at the Henry Ford Museum of American Innovation in Dearborn, Michigan.

“We impressed them (the judges), maybe, and it feels good to have these awards,” Houston said. “It feels like we might be able to make this one day.” 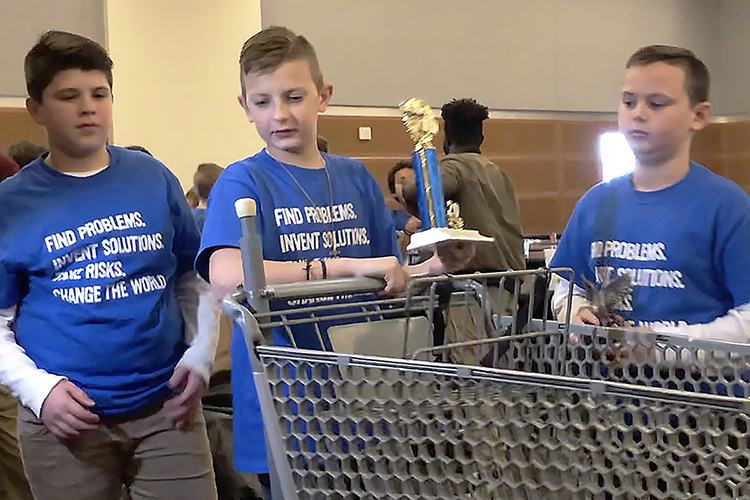 Siegel Elementary fifth-graders Tripp Houston, left, Gabe Cops and Asher Evans prepare to demonstrate their trophy-winning invention, the “Shopper Stopper,” to a Murfreesboro CityTV reporter at the 28th annual Invention Convention held Feb. 27 at MTSU. The three, who took their division’s top “Make Life Easier” prize as well as the event’s “Eagle Award” for best invention, have been invited to the national Invention Convention in June in Michigan. (MTSU photo by Gina E. Fann)

This year’s convention program, which includes all the inventors and their innovations, is here.

State Farm Insurance is the longtime local sponsor of MTSU’s Invention Convention. Guest speakers have included astronauts, artists, athletes, musicians, scientists and historians and, for the last two years, inventors who are the conventioneers’ age.

Each event also showcases an everyday invention and explains its history, such as a tape measure, golf ball, USB charger, sunglasses, yo-yo and headphones. This year attendees learned about the fidget spinner, listening with surprise to the stress-reliever’s convoluted invention timeline as they spun their custom-printed blue toys. 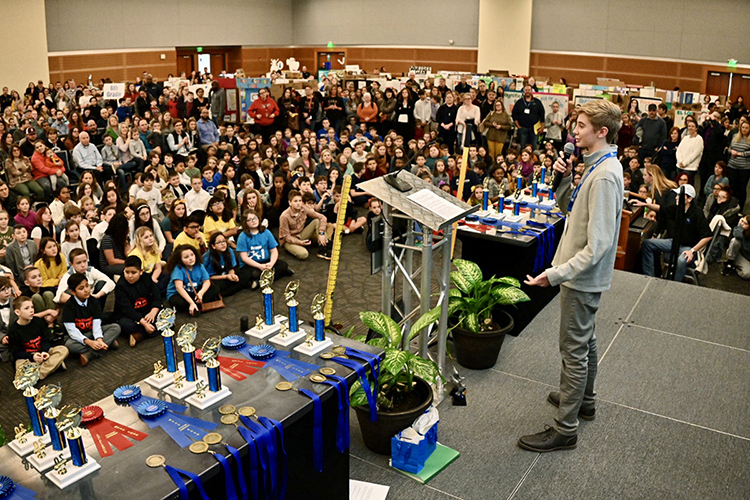 Maddox Prichard of Gallatin, Tenn., talks with a standing-room-only crowd in MTSU’s Student Union during the 28th annual Invention Convention, held Feb. 27 at MTSU. Prichard, whose now-patented “Measuring Shovel” was the hit of the 2016 convention when he was a fourth grader, told his 828 fellow Middle Tennessee innovators to “never give up” in their quest to solve problems. (MTSU photo by J. Intintoli)

“I just want y’all to know, don’t give up,” shovel innovator Prichard told the crowd of fellow inventors. “Keep inventing, and keep practicing, and never give up.”

You can learn more about MTSU’s event, sponsored by the College of Education, at www.facebook.com/MTSUInventionConvention. The national convention website is http://inventionconvention.org. 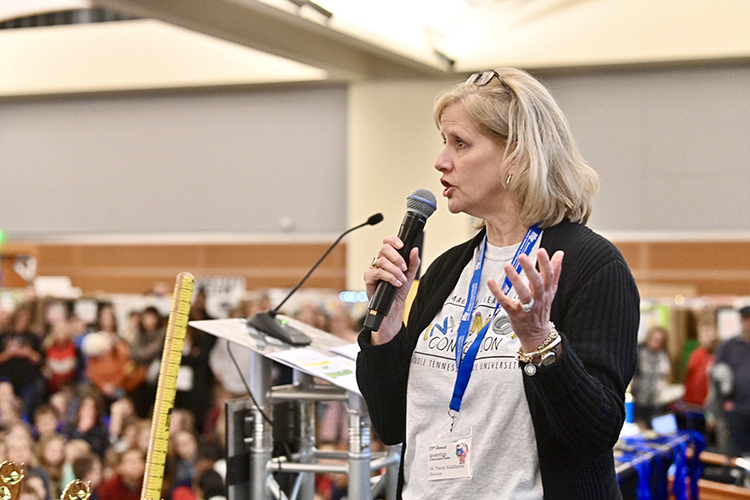 Dr. Tracey Huddleston, a professor in MTSU’s Department of Elementary and Special Education and founder of the regional Invention Convention, talks with attendees before introducing their 2020 guest speaker at the 28th annual event, held Feb. 27. Eight hundred twenty-eight fourth-, fifth- and sixth-grade students brought games and solutions to “make life easier” to present and demonstrate to judges for ribbons, trophies and plenty of praise. (MTSU photo by J. Intintoli) 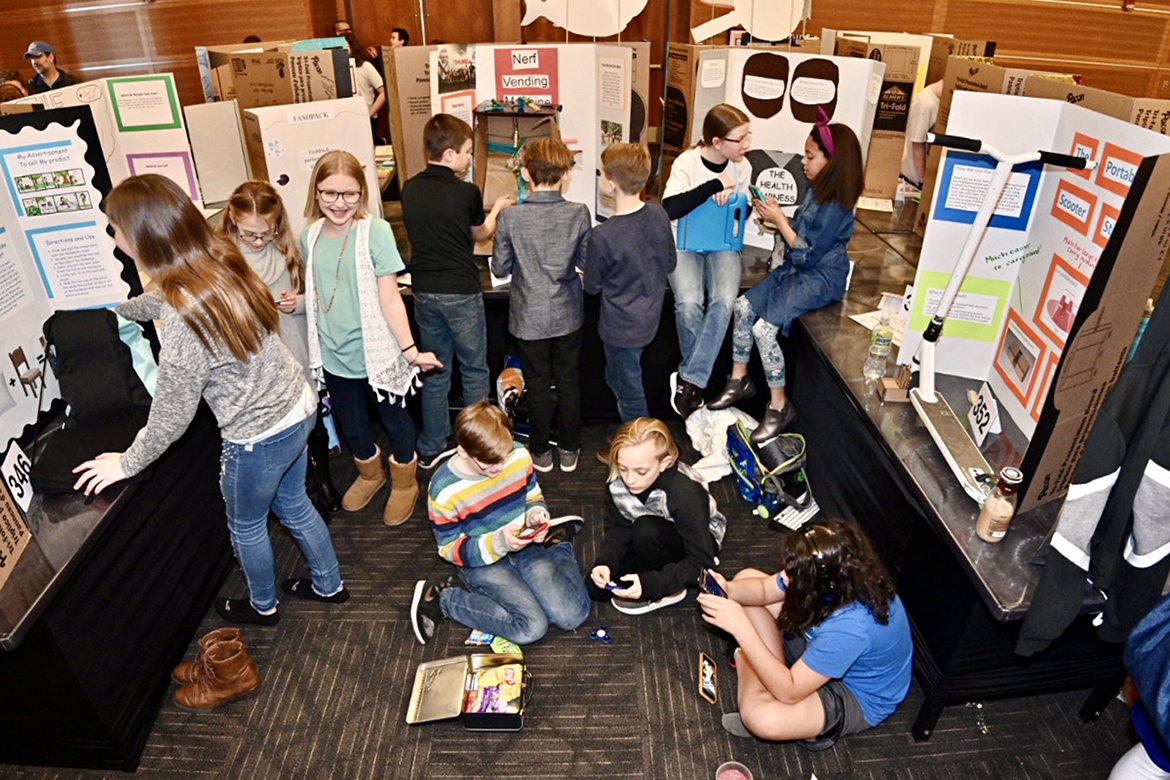 A group of young Middle Tennessee inventors practice their presentations, discuss their inventions and have a snack while waiting to hear the judges’ decisions at the 28th annual Invention Convention, held Feb. 27 at MTSU. Eight hundred twenty-eight fourth-, fifth- and sixth-grade students brought games and solutions to “make life easier” to present and demonstrate to judges for ribbons, trophies and plenty of praise. (MTSU photo by J. Intintoli)