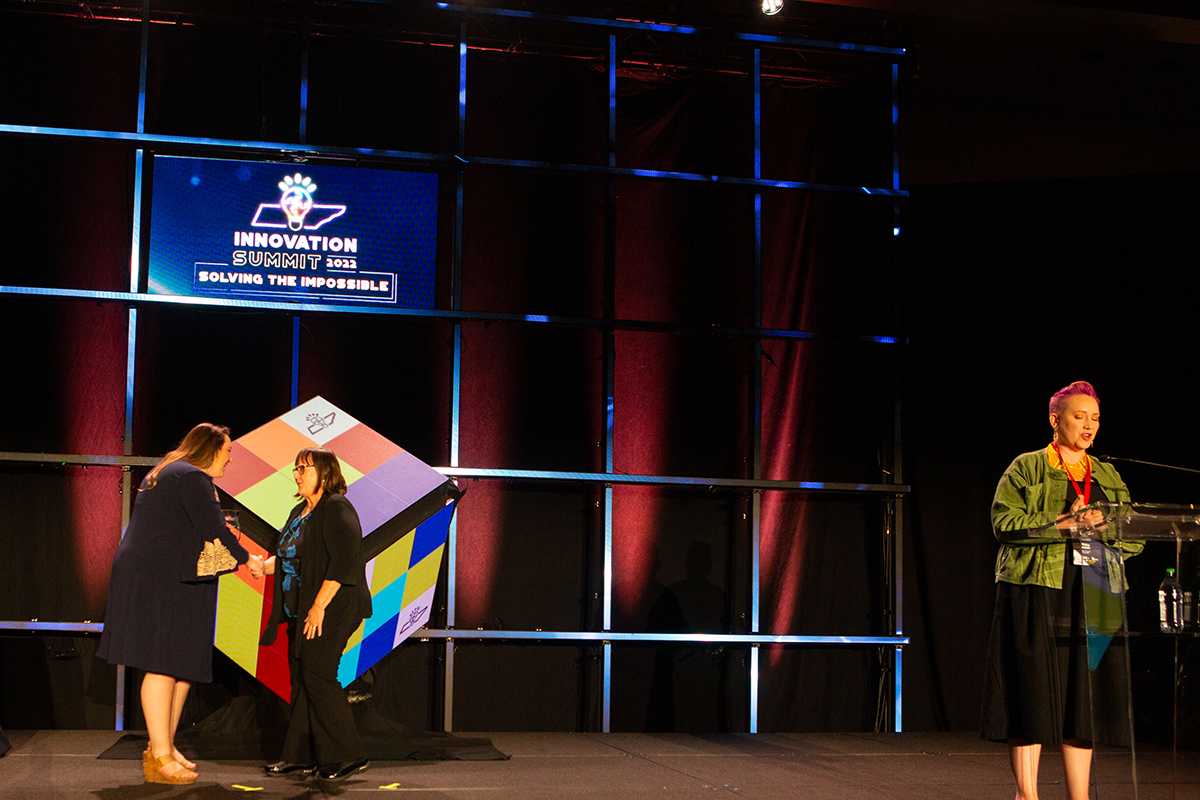 Iriarte-Gross received the honor Tuesday, May 10, during the organization’s annual awards at the Music City Center in Nashville, Tennessee, recognizing individuals for their efforts to promote science, technology, engineering and mathematics. A Facebook posting by the organization thanked her “for all you do for underrepresented groups in STEM education.”

The Tennessee STEM Innovation Network’s mission is to promote and expand the teaching and learning of STEM education in Tennessee’s K-12 public schools.

The Tennessee STEM Excellence Awards are designed to promote effective teaching strategies by recognizing and rewarding quality STEM teachers, highlight effective advocacy partnerships at the local and state levels and share strategies for creating an innovative STEM culture within a school building, district and region.

“I am honored to be recognized as an advocate for STEM by the Tennessee STEM Innovation Network,” Iriarte-Gross said. “I advocate for STEM every day as a professor of chemistry and director of the Women in STEM Center.

“After all, where we would we be today, in our changing world, if we do not include everyone, including girls and other underrepresented groups, in protecting our environment, developing new medicines, or designing energy efficient vehicles?”

Iriarte-Gross said she “advocates for STEM by collaborating with others to promote best practices in gender equity in STEM professions. We support women STEM professionals in their academic and career growth. … What this award means to me and to the WISTEM Center is that we are on the right path to success when we utilize the knowledge and skills of women and marginalized groups in STEM.

Iriarte-Gross attended the event with Greg Rushton and Kevin Ragland from the Tennessee STEM Education Center at MTSU, where Rushton is executive director and Ragland is associate director.

Ragland said among Iriarte-Gross’ “most notable accomplishments was starting the first Expanding Your Horizons Conference in Tennessee in 1996. Through hands-on activities, this conference introduces middle and high school girls to STEM careers and mentors. This conference has served more than 10,000 girls.”

Now called the Tennessee Girls in STEM Conference, the 26th annual event will be held in September.

“We invite role models to show the girls that they can succeed in STEM and be an engineer, chemist or microbiologist,” Iriarte-Gross said. “We provide opportunities for girls to explore STEM education and careers by talking with women in different STEM disciplines.”

Cheryl Torsney, MTSU vice provost for faculty affairs and a WISTEM Center advisory board member, said Iriarte-Gross has paved the way for girls and women working in and studying the STEM fields.

“She is a force of nature, whose superhuman advocacy lets girls know that they belong in the lab, in the science classroom and at the table whenever STEM is under discussion,” Torsney added. “We at MTSU are beyond proud of Judith for this recognition.”

Iriarte-Gross is nationally known for her advocacy for encouraging girls and women in the sciences. She is involved in local and national programs supporting the recruitment, retention and graduation of girls and women in STEM education and careers.

Among numerous honors in a distinguished career, Iriarte-Gross, an MTSU  faculty member since 1996, received the MTSU Foundation Career Achievement Award, the William E. Bennett Award, an American Chemical Society Award for Encouraging Women into Careers in the Chemical Sciences, and Women of Achievement-Tennessee by the Women in Higher Education Tennessee statewide organization.