MTSU vets express themselves a..

In the News: Syler discusses government shutdown on WTVF 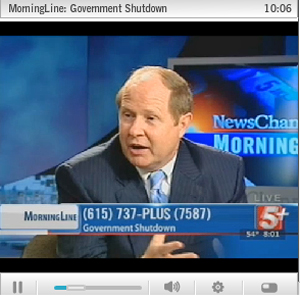 Before coming to MTSU three years ago, Syler spent 26 years serving as former U.S. Rep. Bart Gordon’s chief of staff in Tennessee and recalled the previous government shutdown during the presidency of Bill Clinton.

“I lived through the previous shutdown in the mid-90s,” Syler told program host Janet Kim. “I’ve kind of gotten to see both ends of it. … I think this one, both sides are more belligerent.”

Click on the image below to view a portion of the program, which included call-in questions and comments from viewers.

Click the image to see a portion of the NewsChannel5+ interview.