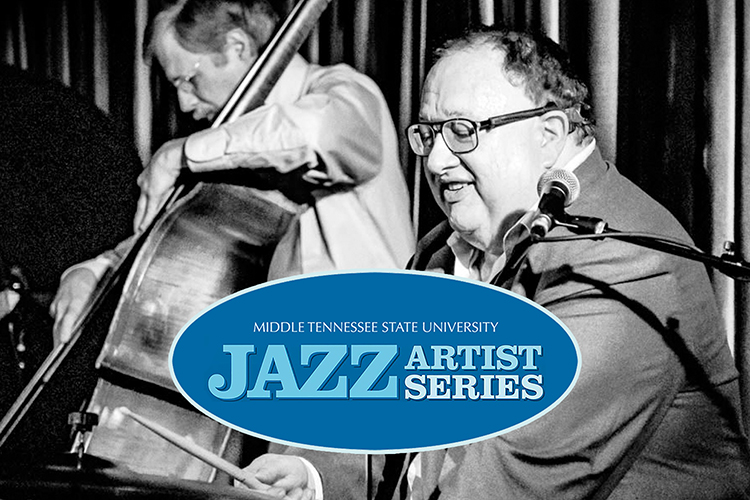 MTSU School of Music faculty members, students and area jazz musicians will pay tribute to the late jazz drummer Duffy Jackson on Wednesday, March 30, in a rescheduled concert that marks the second in this season’s three-event MTSU Jazz Artist Series.

Tickets for the March 30 concert, which begins at 7:30 p.m. in Hinton Hall inside the Wright Music Building at 1439 Faulkinberry Drive, are $10 each. Admission is free for MTSU students, faculty and staff with a current ID. 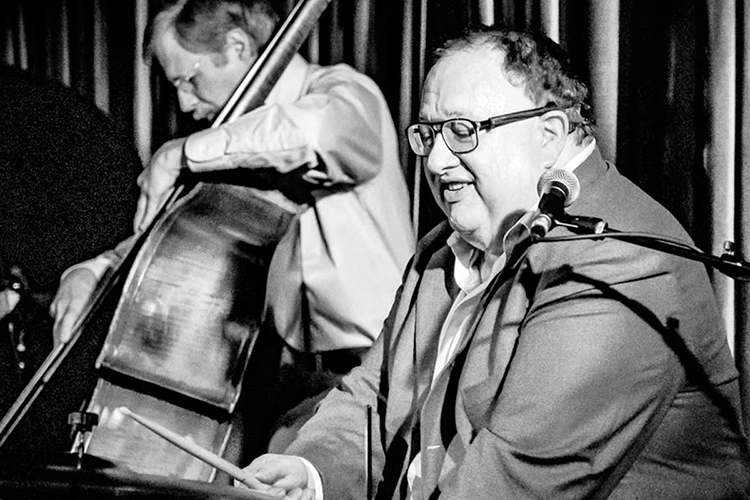 Drummer Duffy Jackson, right, keeps the beat alongside bassist Jim Ferguson during a performance at Rudy’s Jazz Room in Nashville in this undated photo. MTSU’s School of Music will pay tribute Wednesday, March 30, to Jackson, who died in early 2021 after a six-decade career, in the second of this season’s three-concert MTSU Jazz Artist Series. (photo courtesy of Duffy Jackson)

Discounts also are available for area band students and educators.

Concertgoers can reserve tickets by contacting Jamey Simmons, professor of jazz trumpet and director of MTSU’s Jazz Studies Program, at 615-898-2724 or james.simmons@mtsu.edu.

Guests are encouraged to wear masks and follow social distancing measures inside the venue.

The March 30 tribute concert, which was originally set in early February, will feature faculty jazz artists Don Aliquo on saxophone, Chip Henderson on guitar, David Loucky on trombone and Jonathan Wires on bass.

Chris Brown, one of Nashville’s most prominent jazz drummers, will sit in on the drum chair, and respected pianist and educator Kelli Cox will be on keyboards. Trumpeter Mike Barry, trombonist Roger Bissell, two more of Nashville’s finest jazz musicians, will lead their respective sections of this special big band.

“It will feature legendary music associated with Duffy during his tenure with some of the most swinging jazz musicians in history, as well as his time in Nashville. We will also honor his widow, Marina, and her donation to MTSU of a library of his big band music.”

Duffy Jackson, the son of jazz bassist Chubby Jackson, grew up surrounded by great jazz players and first picked up his sticks at age 4.

Duke Ellington asked him to sit in on drums while Jackson was still a child. And instead of attending his high school graduation, Jackson was performing with jazz bassist Ray Brown on the West Coast while his dad picked up his diploma.

Jackson was the youngest drummer, at age 20, ever hired by Count Basie and soon became the anchor for that legendary band, along with Lionel Hampton’s and Illinois Jacquet’s groups. He also worked with Lena Horne and was an important member of the Monty Alexander Trio.

He moved to Nashville in 2008 and influenced the city’s jazz scene until his death at age 67 in March 2021. Jackson often sat in with the Time Jumpers at 3rd and Lindsley, and he established a popular monthly “Swing Night” dance at the Acme Feed & Seed club.

News stories both before and after his death called Jackson “ebullient” and “exuberant.” An example of Jackson’s expertise is available in a 2012 performance below with his band at the Nashville Jazz Workshop.

Now in its 22nd season, the MTSU Jazz Artist Series brings internationally renowned jazz artists to campus for performances and educational workshops. This season will conclude Saturday, April 2, with a 5 p.m. concert by jazz trumpeter Brian Lynch and the MTSU Jazz Ensemble I to close the university’s annual Illinois Jacquet Jazz Festival.

For more information about MTSU’s Jazz Artist Series, please visit www.mtsu.edu/music/jazzseries.php. For details on other special events in the MTSU School of Music in the College of Liberal Arts, visit www.mtsumusic.com or call 615-898-2493.