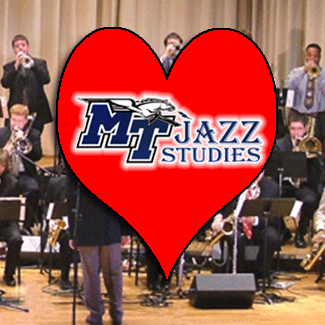 Treat your valentine to a big-band jazz reunion at MTSU Friday, Feb. 13, when “The Return of the Blues Crusade” celebrates 40 years of jazz at MTSU with a concert by students, alumni and faculty.

Members of MTSU’s “Blues Crusade,” also known as the MTSU Jazz Ensemble 1 of top student musicians, poses for a group photo inside the new music building in this early 1980s photo. The building was named for professors Neil and Margaret Wright in 1986. (photo courtesy of MTSU School of Music)

Admission for the 7:30 p.m. concert in Hinton Hall inside the university’s Wright Music Building is $10 for adults and $5 for non-MTSU students. MTSU students, faculty and staff may attend free. All proceeds will benefit MTSU’s John and Bobbie Duke Woodwind Jazz Scholarship Fund.

Dr. John Duke, the founding director of jazz studies at MTSU and the MTSU jazz ensemble known as The Blues Crusade, will direct the three groups in concert with help from current jazz professors Jamey Simmons and Don Aliquo.

This inaugural big-band reunion, part of the university’s Jazz Artist Series, kicks off with the current MTSU Jazz Ensemble I, the university’s top performing ensemble of experienced students, under Simmons’ direction. The Alumni Jazz Band, featuring players from 1993 to 2014 and directed by Aliquo, will follow in the concert lineup.

The Blues Crusade, led by Duke, will close the performance. They will feature vocals by Denise Huffington Patton backed by the all-star band recreating music from Count Basie, Woody Herman and Stan Kenton.

This is the first reunion for students and faculty in MTSU’s jazz studies program since it was established in 1973. MTSU alumni who were part of the jazz ensembles are being invited to perform and will gather for the first time at 6 p.m. before the concert.

Jazz enthusiasts and MTSU supporters are also being asked to make a tax-deductible donation to the John and Bobbie Duke Woodwind Jazz Scholarship endowment to help future jazz students reach the same success as the alumni.

You can learn more about MTSU’s jazz studies program at www.mtsu.edu/music/jazz.php.

For more information on this and other concerts in the MTSU School of Music, call 615-898-2493 or visit the School of Music’s “Concert Calendar” link.