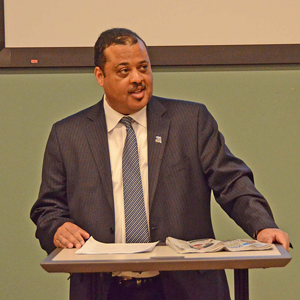 MTSU College of Mass Communication alumnus Jeffery Reid (B.S. ’81), now an executive producer at WXIA-TV, the NBC affiliate in Atlanta, talks about the popular series he produced while at CNN, “Black in America.” Reid spoke about journalism and media diversity Monday, Feb. 23, at the College of Education Building as part of MTSU’s Black History Month celebration. (MTSU photos by Jimmy Hart)

Reid returned to campus to give a guest lecture entitled “From the Front Lines of Media: Media Diversity” inside the College of Education Building as part of MTSU’s ongoing Black History Month celebration.

A native of the rural town of Whitwell, Tennessee, Reid said he came to MTSU as a criminal justice major and switched to recording industry management before eventually settling on broadcast journalism after hearing an inspiring talk from Chris Clark, the longtime award-winning anchor for WTVF-TV NewsChannel5 in Nashville and now an instructor at MTSU.

“For the last 34 years I’ve been documenting history. That’s what we do as journalists, we document history,” Reid told his audience. “… No matter what degree you’re pursuing, be passionate about it.”

Reid paused throughout his presentation to show the audience examples of some of his most favorite work related to black history, from a documentary revisiting the 1963 Birmingham church bombing that killed four little girls to the award-winning “Black in America” series with Soledad O’Brien he produced while at CNN.

Throughout his 30-year-plus career, Reid has overseen coverage of a variety of historic events: the Sept. 11 terrorist attacks, six presidential elections, the killing of Osama Bin Laden. “You name it, I’ve covered it,” he said.

But Reid said he considers the “Black in America” series he began in 2007 as the “defining moment” of his career thus far. The series of documentaries, one of CNN’s most successful franchises, were made to commemorate the 40th anniversary of the assassination of Dr. Martin Luther King Jr. by examining the state of black America today.

“It’s projects like that where being a journalist and being a manager at a network … where you can explore issues, sometimes hard issues, in a way where you can look for answers,” he said, pointing to issues such as the aftermath of the police killings of Michael Brown in Ferguson, Missouri, and Eric Garner in New York.

In the wake of those incidents, Reid, in his current role at Gannett-owned WXIA-TV, recently produced a series of town hall meetings to discuss ways of fostering better relationships and greater trust between police and the communities they serve.

Reid’s son, Jeffery Reid Jr., introduced Reid to the audience. The younger Reid, who is following in his father’s footsteps at MTSU, is currently a sophomore mass communication major and president of the university’s chapter of the National Association of Black Journalists.

Reid Jr. said his father is “an avid believer in the saying ‘If you love what you do, you’ll never work a day in your life,’ and he has instilled that belief in his three children.”

Fielding questions from students as well as others in attendance, such as Mass Communication Dean Ken Paulson, the elder Reid told the roomful of young faces that:

“If you can write, produce and tell a good story, you’ll always have a job,” Reid said.

He encouraged aspiring journalists of color to seek decision-making positions such as executive producer, news director and editor that shape the way news is covered.

Dr. Dwight Brooks, director of MTSU’s School of Journalism, applauded Reid’s commitment to his alma mater and the MTSU College of Mass Communication as one of nine “cornerstone donors” who contributed at least $10,000 for the college’s Center for Innovation in Media.

Located in the Bragg Mass Communication Building, the center houses all of the student-run media, plus the university’s National Public Radio affiliate, WMOT 89.5 FM, under one roof to facilitate cross-training and collaboration.

Brooks emphasized Reid’s efforts to come back to campus numerous times to engage students personally and to take a genuine interest in helping them jump-start their careers. Reid also spoke to journalism classes earlier in the day.

“As they say, Jeffery Reid has talked the talk and walked the walk,” Brooks said. “We appreciate everything he has done for our university and our college.”

MTSU alumnus Jeffery Reid, third from right, takes a photo with members of the Omega Psi Phi fraternity following his lecture Monday at the College of Education Building.