Grad student needs votes by May 10 to keep moving ...

Grad student needs votes by May 10 to keep moving forward 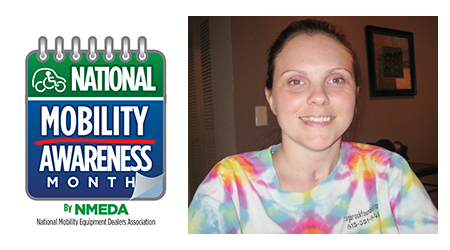 UPDATE: Because she received enough votes to make it into the top five percent of contestants, MTSU student Jennifer Austin now is a semifinalist in the National Mobility Equipment Dealers Association competition. The judges will select three winners of special vans fully equipped for disabled people to drive, which will enhance their independence and self-sufficiency.

Austin says, “I cannot begin to describe how incredibly grateful I am to all of you for helping make this dream a possibility!! … Please pray that my story can make an impact on the judges’ minds and hearts, as each of the semifinalists is deserving of this awesome prize!”

Winners will be announced at the end of May. Please read Jennifer’s story below.

The 26-year-old graduate student in MTSU’s Department of Health and Human Performance is a contestant in the National Mobility Equipment Dealers Association competition.

Austin, who is paralyzed from the chest down, needs votes to become one of three people in the United States to win a fully equipped van that will enable her to drive herself wherever she needs to go.

If she wins, it will be a giant move forward in her continuing quest to regain more control over her life after a 2006 hit-and-run accident on Interstate 24.

“The whole point of going to graduate school is for better career opportunities, to really take that last step in independence and be able to drive again,” Austin said. “That’s going to open so many other doors for me.”

At present, Austin’s caregivers from At Home Care of Murfreesboro provide her with transportation. When the weather is nice, she travels to class in her electronic wheelchair from her apartment at Campus Crossings.

Tennessee Vocational Rehabilitation Services is helping her manage, but she aspires to a job in the health professions so that she can pay for her therapy and care herself. Being able to drive herself to her future workplace would help make that possible, she said.

“It would have an automatic ramp that comes down, which would allow me to drive my chair up into the van, right into the driver’s seat,” Austin said of the grand prize that would be so much help to her.

“There are special locks that would lock down my chair for safety when I’m driving.”

Austin was injured while driving home to Cowan, Tenn., on I-24 when an SUV swerved into her car and sent it into the median, flipping it several times.

Police told her they believe she would not have survived if she hadn’t been ejected through the windshield.

Austin was flown to Vanderbilt Hospital in Nashville, where her spleen and part of her left lung were removed. She now has minimal use of her arms and hands, but everything else is paralyzed.

The perpetrators of the hit-and-run accident remain at large, but Austin said she has moved on.

She credits MTSU’s Disabled Student Services with helping her take notes for her classes.

It also helps to have a supportive family. Austin still goes home to Cowan every weekend to see her parents and sister.

“They are the complete reason why I’m still here and able to do all this,” Austin said.

To vote for Austin, go to www.mobilityawarenessmonth.com/entrant/jennifer-austin-cowan-tn, enter your information and agree to the terms. The final day to vote is Friday, May 10.

To get an extra vote each day for Austin, click on the “want an extra vote” icon and answer the question before you submit your vote.

Only one vote per IP address is allowed per day, but individuals may vote from their cell phones as many times per day as they wish until the end of the contest.

At the end of the competition, the judges will read the individual stories of entrants who made it into the top 5 percent of vote-getters.