‘MTSU On the Record’ studies G.. 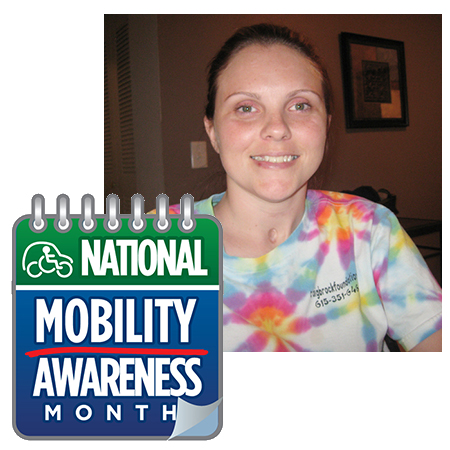 You can help give MTSU graduate student Jennifer Austin the priceless gift of more independence, and it won’t cost you a cent.

The MTSU graduate student, who’ll accept her master’s degree in health Saturday, May 10, is a contestant in the 2014 “Hometown Heroes” contest, sponsored by the National Mobility Equipment Dealers Association.

She hopes to win a customized wheelchair-accessible van so she can have reliable transportation. She reached the semifinals of the contest last year but did not win.

Voting is underway through Friday, May 9. The winners will be announced in June.

The 27-year-old Cowan, Tenn., native was injured Sept. 15, 2006, while driving home on Interstate 24. An SUV swerved into her car and propelled it into the median, flipping the vehicle several times.

Police told her they believe she would not have survived if she hadn’t been ejected through the windshield.

Austin was flown to Vanderbilt University Medical Center in Nashville, where her spleen and part of her left lung were removed. She now has minimal use of her arms and hands and is paralyzed from the mid-chest down.

The perpetrators of the hit-and-run accident remain at large, but Austin said she has moved on.

“I am asking for my family, friends, mentors and members of the community to take a minute each day from now until May 9 to visit the link and vote for me,” Austin said.

Click on this graphic for a link to vote for MTSU grad student Jennifer Austin and read her sister’s nomination letter in full.

Austin was nominated by her sister, Ashlee, who wrote in her nomination story that her sister’s “positive attitude and genuine gratitude for life is practically contagious!”

“She is a reminder to all of us that life is precious and regardless of the struggles we may face, God placed us on this earth for a purpose; and Jennifer’s purpose is far greater than she ever imagined,” Ashlee Austin said in her nomination.

Only the nominees in the top 10 percent of vote-getters will move on to the second phase of the competition. Voters can cast only one ballot each day per email address, but answering a bonus question on the web page will give the nominee two votes instead of one.

“It’s important that we support and encourage one another, and this contest is all about bringing awareness to disability-related issues such as mobility and empowering those facing these obstacles,” Jennifer Austin said.