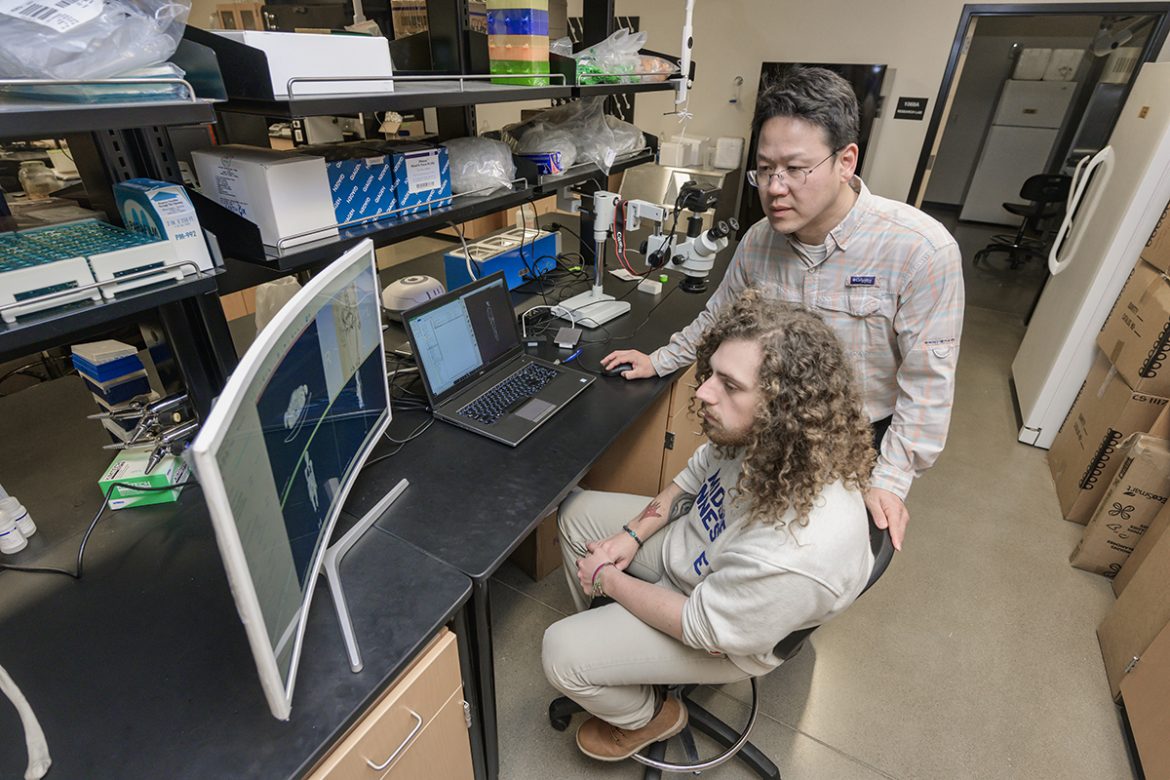 Jeong, who has been a member of the Department of Biology and the faculty working with the university’s interdisciplinary Forensic Science Program since 2017, learned earlier this year he is the 2022 Kerley Award recipient, recognizing excellence in the continuing effort to research and develop methods in forensic anthropology. 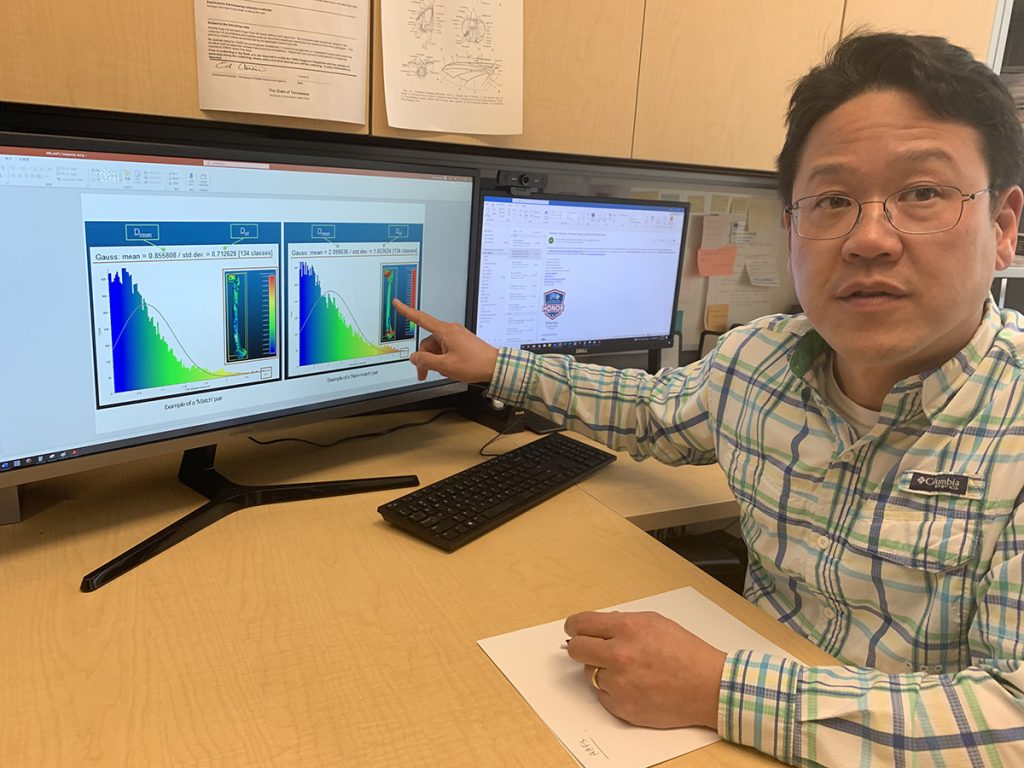 In his Science Building office, Yangseung Jeong, an MTSU assistant professor in the Department of Biology and the Forensic Science Program, points out research data that led to his receipt of this year’s Ellis R. Kerley Research Award, announced recently by the Kerley Forensic Sciences Foundation. He said the research “will impact the forensic science community.” The award is presented for one paper or poster that best demonstrates excellence in pursuit of advances in the forensic anthropology field each year. (MTSU photo by Randy Weiler)

The announcement was made by the Ellis R. Kerley Forensic Sciences Foundation.

Retired MTSU Forensic Institute for Research and Education Director Hugh Berryman received the honor in 2008. MTSU is now one of three U.S. universities with multiple Kerley Award winners since 2002.

The Kerley Research Award is presented for one paper or poster that best demonstrates excellence in the pursuit of advances in the field of forensic anthropology each year.

The 3D CT, or computed tomography, is a nondestructive scanning technology that allows a researcher to view and inspect the external and internal structures of an object in a 3D space.

Fellow forensic anthropologists “will learn how to perform a pair-matching of bilateral bones via mesh-to-mesh comparisons using 3D image data from my research. This will impact the forensic science community by suggesting a new, objective pair-matching method, which will not only enhance the accuracy of segregation of commingled remains but also overcome the drawbacks associated with traditional pair-matching methods,” Jeong said.

“This new method will be useful for quantifying the degree of asymmetry of paired bones as well as segregating commingled skeletal remains recovered in a forensic context,” he added. 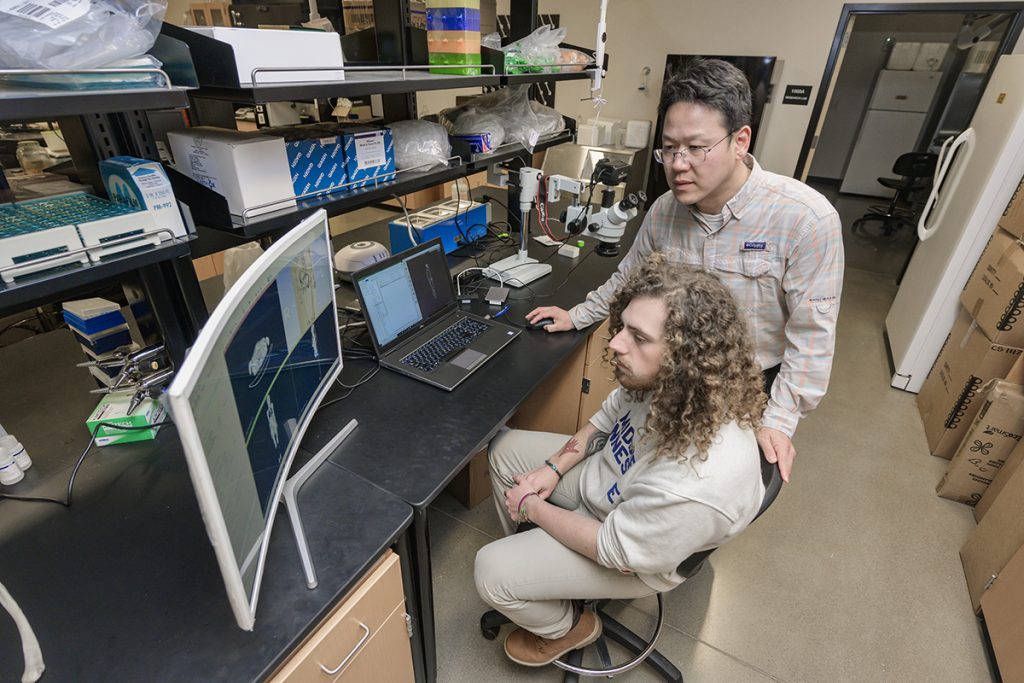 Jeong’s CT project began in 2020 and is continuing.

Originally from Gwangju, South Korea, Jeong earned two degrees from Seoul National University. He earned his doctorate from the University of Tennessee-Knoxville in 2014.

Jeong worked three years for the Department of Defense POW/MIA Accounting Agency in its Central Identification Laboratories in Hawaii and Omaha, Nebraska.

The Kerley Research Award includes $250, a plaque to be awarded next year during the Kerley Foundation/Anthropology section reception and an invitation to speak about the research during the reception.

Jeong plans to submit a newer research project by Aug. 1 to the American Academy of Forensic Sciences for its 2023 event. 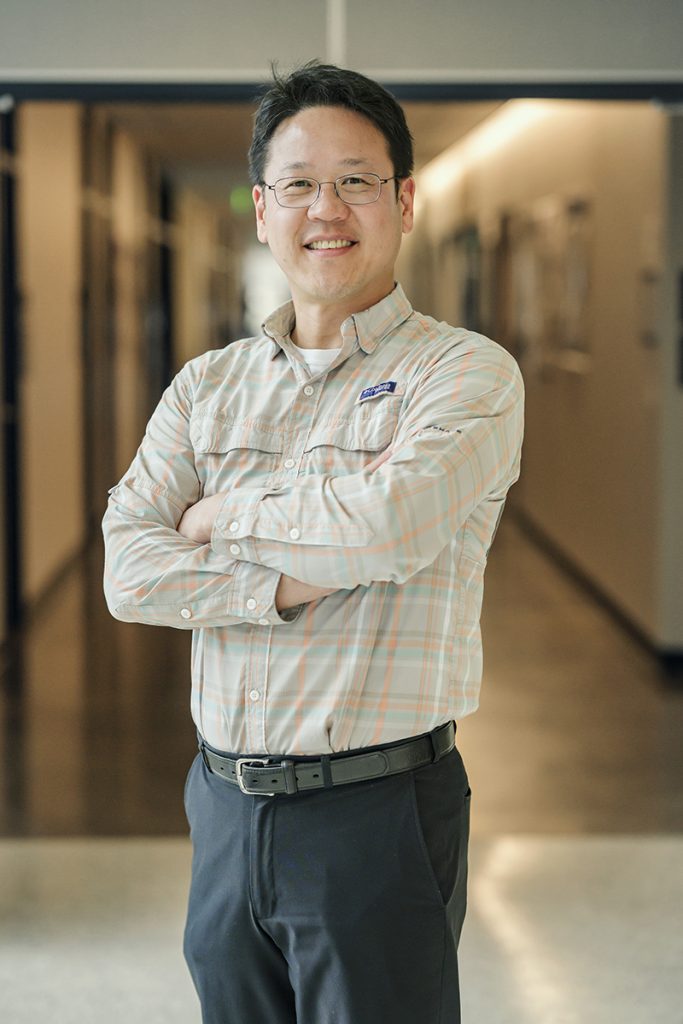 MTSU assistant professor Yangseung Jeong says earning the coveted 2022 Ellis R. Kerley Research Award “makes me convinced my research would contribute to the forensic anthropology community, which is one of my ultimate goals as a forensic anthropologist.”. (MTSU photo by Andy Heidt)

“My students were eager and ready to learn new techniques and knowledge,” Jeong said. “They significantly contributed to this research by manipulating 3D images and producing the raw data to be statistically analyzed.”

Sullivan, Ali and Luciano are co-authors in the award-winning research along with Jeong’s South Korean colleagues Eun Jin Woo and Yuryang Jang.

Three years before Jeong came to MTSU, the university opened its new Science Building. Students and faculty have benefited from MTSU’s vision to prepare for the future with new technology and lab equipment.

“Since I work on CT data of actual forensic cases, my research should be performed in a very secured space,” he said. “The Science Building provides me with a very secure lab, which helps keep my data and analyses safe.”

Winning the Kerley honor can have far-reaching implications, including bringing potential outstanding young researchers to the university.

“Definitely, it helps recruit future student researchers in my lab,” Jeong said. “Actually, some of my students have already talked about my research and this award to their friends, and I have had some requests to join my lab.

“The fact that the MTSU Forensic Science program possesses the winner of the (2022) award means MTSU is one of the top forensic science programs recognized not only nationally but also internationally.

“When (prospective) students consider and select their future school and program, I believe one of the important factors to consider is if the school and program possesses good faculty. This award can be understood as ‘objective proof’ provided by my peer forensic anthropologists that I have a capacity to perform good work.” 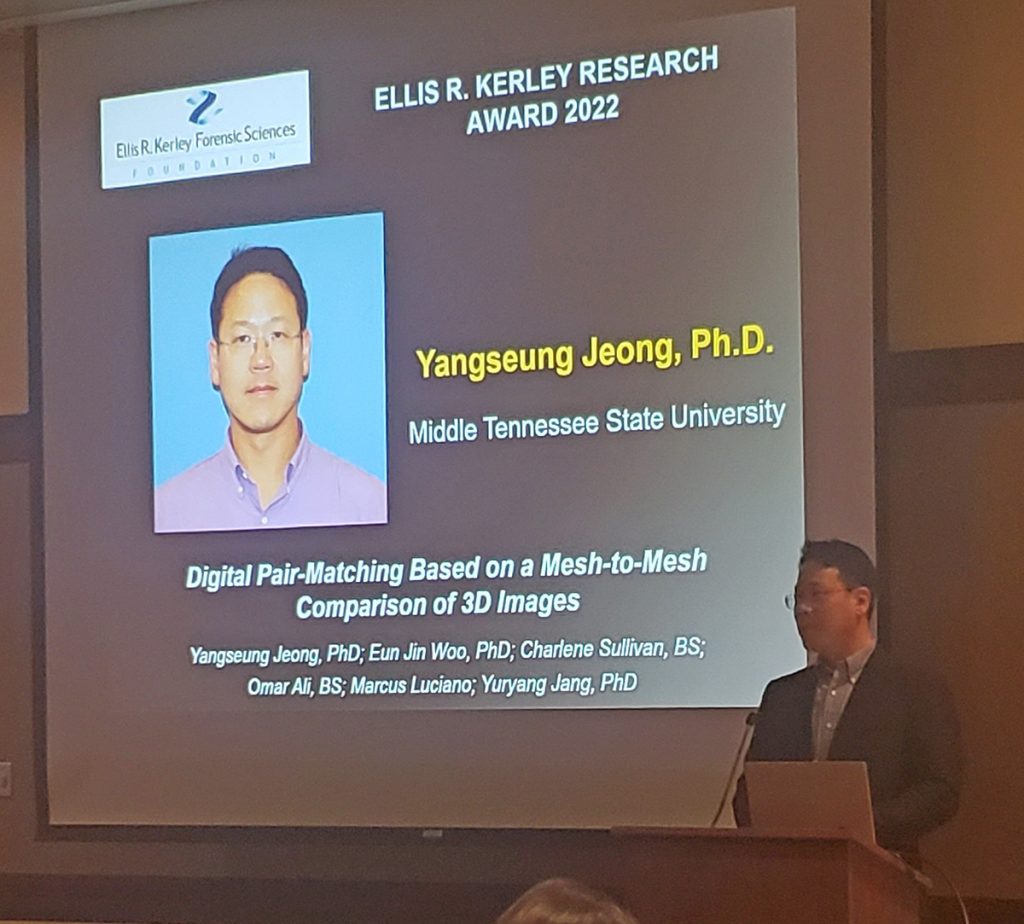