In the News: Ukraine, ‘divisiv..

MTSU graduate student Christine Whelchel knew it was never too late to achieve her dreams.

In the past year, the long-time “Jeopardy!” fan, part-time musician and mother of three dominated on the game show and started a Master of Music degree program — all amid a diagnosis of and treatment for breast cancer.

“I watched ‘Jeopardy!’ as a kid … and started again about eight years ago when I got the bug to try out myself,” Whelchel said. “I thought it was something I could do and wanted to try it … and I always regretted not majoring in music. I saw an opportunity to correct the mistake.”

Whelchel did more than just try: she made it to the show and hit a four-game “Jeopardy!” win streak, earning over $75,000 in shows that aired at the end of February.

“I was always that kid who remembered every bit of ‘useless’ information, and that has stuck with me through adulthood,” she said. “I got into the trivia scene a couple of years ago and started playing a lot of online trivia during COVID, and that helped prepare me for the show.” 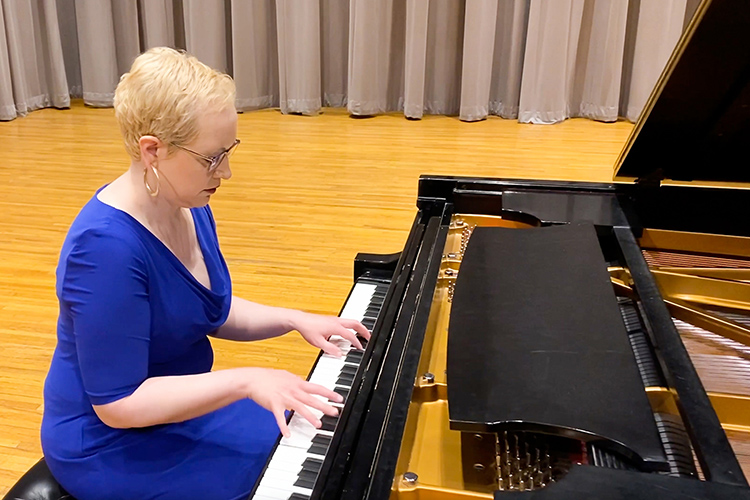 Christine Whelchel, Middle Tennessee State University graduate music student, plays Beethoven at the School of Music’s Hinton Hall on March 21, 2022, and shares her views on becoming a “Jeopardy!” champion and returning to school with MTSU’s Master of Music piano program all in the last year amid a diagnosis of and treatment for breast cancer. (MTSU photo by J Intintoli)

Her wins currently qualify her to return for the “Jeopardy!” Tournament of Champions. Whelchel said she will get the final word later this fall.

A Memphis, Tennessee-native, Whelchel applied through the show’s online quiz in spring 2021 soon after receiving her cancer diagnosis. She advanced to the Zoom audition round later that spring and landed a spot on the show.

“The trick was finding a time slot to sign up for that didn’t conflict with picking up kids from school or going to the hospital for my pre-surgery consult,” she said. “Fortunately, there was one slot at the perfect time!”

By the time Whelchel filmed her episodes in December and January, she had undergone a double mastectomy and removal of three lymph nodes, reconstruction surgery and chemotherapy.

Currently, she said, her cancer has been completely removed.

It was Whelchel’s penultimate night on “Jeopardy!” that created a lot of media buzz when she bravely removed her wig to normalize what cancer recovery looks like.

“I had a music history midterm right in the middle of my episodes airing,” Whelchel said. “Trying to focus on studying when there were news articles about me all over the place was not easy — tempting to read what people were saying about me on Twitter!”

Whelchel began her Master of Music in piano performance this spring. Though she has been a working musician since playing her first wedding as a teenager, she had always wanted to return to school for music.

She said her professors have all been wonderful so far.

Whelchel’s musicology professor, Joseph Morgan, is also the director of graduate studies in the School of Music and advised her about the program.

“She is obviously smart, witty and a valued member of our community,” Morgan said, adding that these are traits shared by all their students. “We appreciate what she has done with her newfound fame on ‘Jeopardy!’ …

“I do have to say I was quite humbled at one point this semester when I realized I was giving a midterm exam to the reigning ‘Jeopardy!’ champion, but our students amaze me every day.” 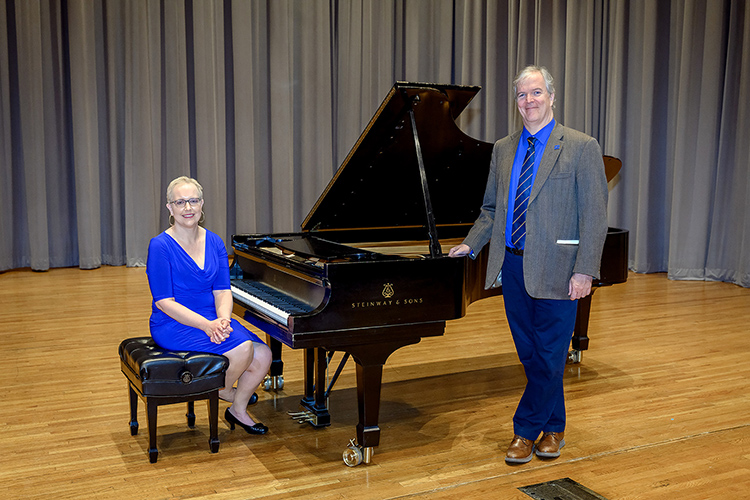 Christine Whelchel, Middle Tennessee State University graduate music student, and Joseph Morgan, School of Music associate professor and director of graduate studies, share the stage at the School of Music’s Hinton Hall on March 21, 2022, and speak about why experienced and professional musicians are choosing to further their education with MTSU’s graduate music program. (MTSU photo by J Intintoli)

Many musicians, both experienced and professional, have pursued further education with the School of Music’s variety of graduate programs, Morgan said.

“What I think is most unique about our program is that we are simultaneously the best and the most affordable graduate program in music in Nashville! Rarely do these two attributes go-hand in-hand,” he said.

“Our faculty have an unparalleled experience and world-class expertise balanced by an equally unbridled passion for teaching. We actively work to accommodate the schedules of working students in order to help them advance their careers. We (even) have a fully online program for music education. And we are just 25 minutes south of Nashville — it’s worth the drive!”

To learn more about the opportunities available at the School of Music, visit the website, www.mtsu.edu/music. 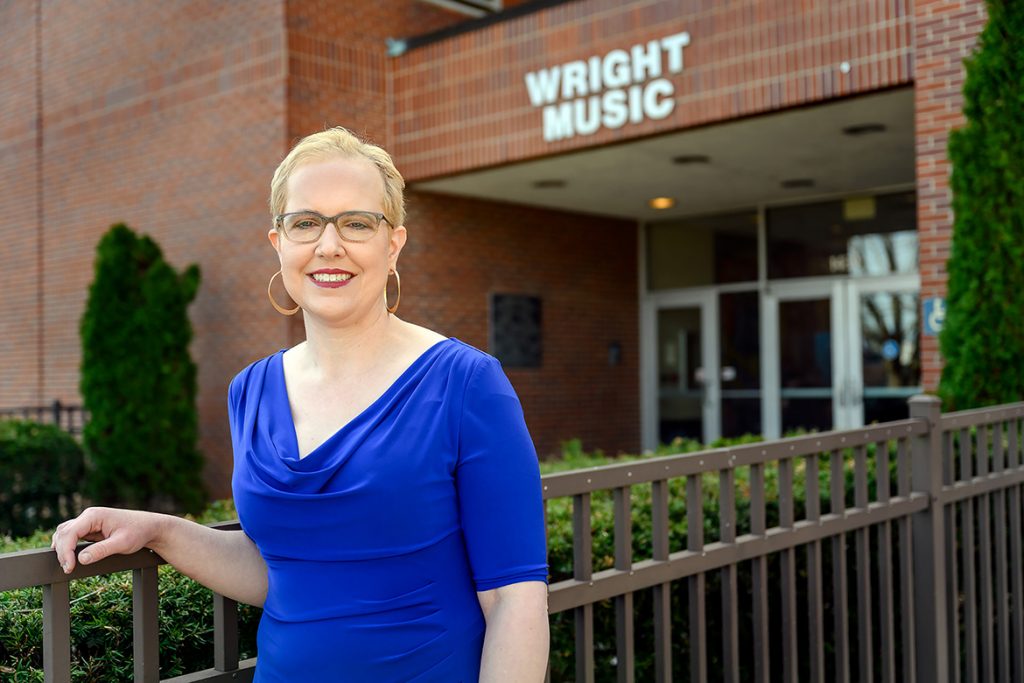 Christine Whelchel, Middle Tennessee State University graduate music student, is a “Jeopardy!” champion and a student ih MTSU’s Master of Music piano program, all in the last year amid a diagnosis of and treatment for breast cancer. (MTSU photo by J Intintoli)