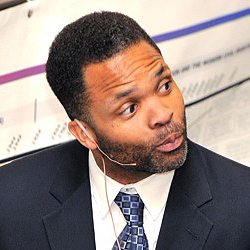 Illinois Congressman Jesse Jackson Jr. told an MTSU audience of about 100 April 6 that there’s a need for a “third Reconstruction” period in American history.

Illinois Congressman Jesse Jackson Jr. uses a timeline to illustrate his call for a "third Reconstruction" during his April 6 lecture at MTSU. (MTSU photo by Andy Heidt)

Jackson, speaking in the University’s State Farm Lecture Hall in the Business and Aerospace Building, said that third Reconstruction should include constitutional amendments to ensure “equal high quality” human rights for all Americans—such as health care, education and a clean environment—regardless of where they live.

He argued that the United States now has a “separate but unequal system” with quality of services that vary from state to state.

The younger Jackson was first elected to Congress in 1995. He serves the 2nd Congressional District of Illinois, which borders both Lake Michigan and the state of Indiana and encompasses almost all of south Chicago and several suburban communities.

The congressman, referring to three large timeline charts during his MTSU lecture, divided American history into periods he described as “pre-construction (1619-1774),” “construction (1774-1861)” and “deconstruction (the Civil War).”

The “first Reconstruction,” he said, was the period after the Civil War. He called the civil-rights movement the “second Reconstruction.”

A “third Reconstruction,” he said, would be defined by amending the Constitution to ensure certain human rights, like health care, just as other amendments ended slavery and gave women the right to vote.

“There’s absolutely nothing ‘civil rights-speechy’ about the remarks I’m giving to you tonight,” Jackson said. “When I argue for constitutional rights and human rights, I am arguing for everyone. … You transcend being a Democrat or Republican, because you are arguing for everybody.”