Chaos in the Congo 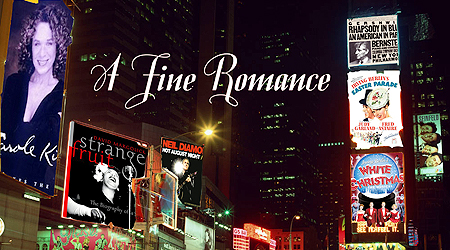 Irving Berlin, George Gershwin, Neil Diamond and Carole King are only a few of the creative masters to be discussed by three MTSU professors in conjunction with an exhibit at Murfreesboro’s Linebaugh Public Library.

“A Fine Romance,” a tribute to Jewish composers and their contributions to American music, is slated for viewing March 9-April 20 at Linebaugh, which is located at 105 W. Vine St.

The nationally touring display tells the history of Jewish songwriters from 1910 to 1965 with images from Broadway musicals, classic films, posters and personal collections.

Dr. Elyce Helford, a professor of English at MTSU who has taught Jewish-American studies, will discuss “Jewish Immigrants: Why Broadway?” at 2 p.m. Sunday, March 18.

“In addition to celebrating a rich and multifaceted tradition, we can discuss why Irving Berlin wrote ‘White Christmas’ and ‘Easter Parade,’ two of the most famous songs for non-Jewish holidays,” says Helford. “And we can explore how Abel Meeropol (as Lewis Allan) wrote the anti-lynching anthem ‘Strange Fruit,’ though most people still believe it was written by Billie Holiday, who made it famous.”

Dr. Bill Levine, also a professor of English, will present “From Tin Pan Alley to Minton’s Playhouse and Back” at 7 p.m. Tuesday, April 3. The Riverdale High School Jazz Band, under the direction of Mike Aymett, will perform musical selections.

At 7 p.m. Thursday, April 19, Dr. Paul Fischer, MTSU professor of recording industry, will talk about “Jews in the New Tin Pan Alley: Sounds of the Sixties.” The Oakland High School Chamber Choir, under the direction of John McDonald, will provide musical accompaniment.

“A Fine Romance” was curated by David Lehman and developed by Nextbook Inc., a nonprofit organization, and the American Library Association Public Programs Office. It is sponsored locally by the MTSU Center for Popular Music and Friends of Linebaugh Library.