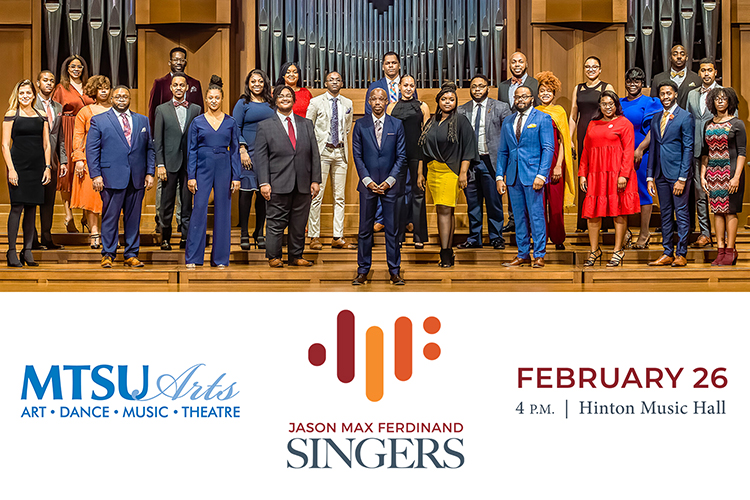 The Jason Max Ferdinand Singers, a Cincinnati-based group comprising vocalists from across the nation, are set for a Saturday, Feb. 26, concert at 4 p.m. in Hinton Hall inside MTSU’s Wright Music Building, located at 1439 Faulkinberry Drive. 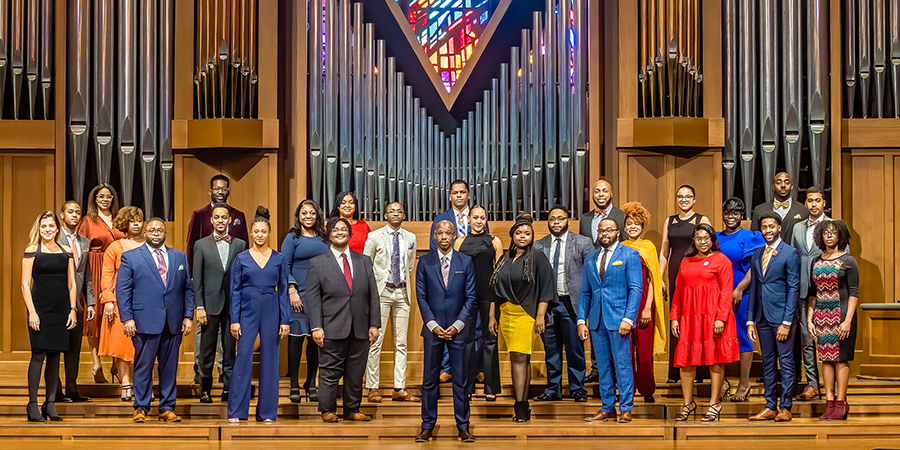 Award-winning choral director Jason Max Ferdinand, center, is surrounded by members of the choral group that shares his name in this publicity photo. The Jason Max Ferdinand Singers are set for a free public concert at MTSU, set Saturday, Feb. 26, at 4 p.m. in Hinton Hall inside the university’s Wright Music Building at 1439 Faulkinberry Drive. (image provided)

Led by award-winning Oakwood University music professor Ferdinand, the singers also have welcomed MTSU School of Music professor Cedric Dent as their artist/arranger-in-residence since their March 2021 inaugural performance in the “Live from London — Spring!” webcast.

Since then, as events have opened up across the country, the choral group’s calendar has included performances at universities, churches, music festivals and choral competitions.

This free MTSU community performance, which also marks the 10th season of the College of Liberal Arts’ “MTSU Arts” brand for the university’s fine arts programs, is sponsored by the Office of the President, MTSU’s Sidney A. McPhee.

Guests are encouraged to wear masks and follow social distancing measures inside Hinton Hall during the concert.

Ferdinand, a native of Trinidad and Tobago who also serves as director of choral activities and chair of the music department at Oakwood in Huntsville, Alabama, also conducts the Aeolians of Oakwood University, recipients of multiple national and international choir awards.

He first developed his idea for the JMF Singers in 2001 with an aim of reintroducing the choral works of underrepresented composers and serving as an inspiration to the world. Ferdinand had planned to introduce the new group in 2020, but the pandemic threw a hitch into their plans. After Jan. 6, 2021, they forged ahead with an aim of unity and hope after the insurrection at the U.S. Capitol.

Dent, one of the founding members, arranger and co-producer of the renowned 10-time Grammy-winning a capella sextet Take 6, joined the MTSU faculty in 2005 and teaches courses in music theory, history of black gospel music, vocal jazz ensemble and music industry. He maintained an active touring schedule with Take 6 until 2011, when he began teaching full-time.

He is also a two-time Grammy-nominated music arranger and continues to compose and arrange for various live and recording projects. His arrangement of the Charlie Chaplin classic, “Smile,” which the Oakwood Aeolians performed at the 2019 American Choral Directors Association conference, remains one of their most talked-about performances.

Dent also serves as director of the MTSU Singers vocal jazz ensemble and as a faculty composer for MTSU’s Stones River Chamber Players.

Attendees can get a preview of the JMF Singers’ performance in the video below, which features their presentation of Dent’s arrangement of the traditional African American spiritual “He’s Got the Whole World in His Hands.”

For more information on concerts and events in the MTSU School of Music, call 615-898-2493 or visit the  “Concert Calendar” link.