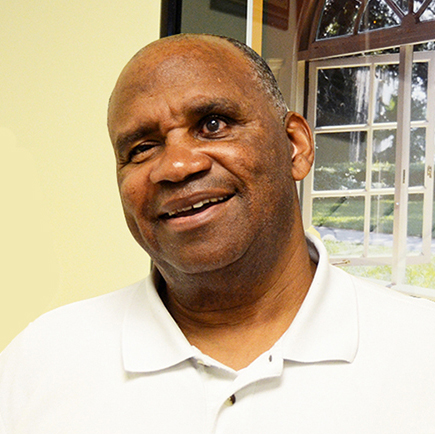 This week, Harris, who has been blind since birth, will retire from the job he calls “the greatest thing ever to happen to me” after more than 27 years of service as an iconic member of the university staff.

A native of Munford, Tenn., in Tipton County, Harris officially will retire Thursday, Aug. 15, but will stay on in a part-time capacity while his successor is found. The university held a celebration for Harris today in the Keathley University Center.

One of the most treasured people on campus because of his outgoing personality, attitude and treatment of others, Harris said it was time to leave.

John Harris, director of MTSU’s Disabled Student Services, pauses in front of a framed poster titled “Window of Opportunity” that hangs in his office. Harris, 61, will retire Aug. 15 after 27 years-plus on the job. (MTSU photo by News and Media Relations)

“Sometimes you kind of need to know when it’s time to do something different or move in another direction,” he said.

“Two questions I kept asking myself were, ‘Do I have enough money to live on, and could I wake up every morning at 7 or 7:30 and not have anywhere to go?’ For 27 years, I had this job. How am I going to manage that?”

Factoring into his decision, Harris said, was changing technology.

“What I do best is sitting down with students and mapping out a strategy for life,” he said. “You don’t have a lot of time to do that. Things just move too fast.”

Harris, who turns 62 on Oct. 27, leaves a lasting impression on his superiors and colleagues for his work administering the Americans with Disabilities Act and his efforts for students with disabilities.

MTSU’s Disabled Student Services most recently served 770 students with disabilities across the spectrum, including visual impairments, hearing, physical, psychological, learning and others.

“John is like an ADA celebrity within the state,” said Dr. Watson Harris, ADA coordinator and director of MTSU’s Academic Technology Planning and Projects.  “And he deserves this celebrity status.

“He is an excellent advocate for students with disabilities. His heart is in helping these students survive not only college but in pushing them to be successful in life.”

Sarah Sudak, associate vice president for student affairs and dean of students at MTSU, said Harris “established the program at MTSU and has grown the program over the years to serve the needs of our varied students.

“Throughout his years of service, John has broadened his reach beyond the MTSU campus and has become a valuable resource across the state.”

John Harris, left, longtime director of MTSU Disabled Student Services, jokes with John Hood, director of governmental and community affairs for the university, during a special retirement reception for Harris on Aug. 13 in the Keathley University Center. (MTSU photo by
Andy Heidt)

“But he has never forgotten that his roots are at MTSU,” Sudak added. “I know John is eager to see the program reach the next level, and we are committed to ensuring his legacy continues to serve our students well.”

Dr. Deb Sells, vice president for student affairs and vice provost for enrollment and academic services, said Harris “has left an indelible mark on MTSU, having been the primary builder of our highly successful program to support disabled students on our campus.”

“John has served as a skilled service provider while also serving as a role model for students pursuing their education and career,” Sells continued.

“John’s strength has been his ability to build effective relationships, not only with students but with faculty, staff, parents, legislators and other professionals throughout the state. He will be missed.”

During his high school days at the Tennessee School for the Blind in Nashville, Harris said, he was a wrestling team captain who compiled a 21-3 individual record in the 120-pound weight division when in high school.

His love of sports continues: He is a season ticket holder for MTSU football, men’s and women’s basketball and baseball games. And, influenced by his grandfather, who was a Brooklyn Dodgers fan, Harris remains a Los Angeles Dodgers baseball fan, listening to many of their games on radio and occasionally on television.

How does Harris want to be remembered?

“That I love the school (MTSU), that I gave everything I had every day I came to work and that I never wanted to leave work any day and say I didn’t try to help students that day,” he said.