The Changing Faces of STEM

MTSU’s Hood to be honored with ‘Lifetime Ach...

Former state Rep. John Hood, MTSU’s director of government and community affairs, was named Thursday, Jan. 3, by the Rutherford County Chamber of Commerce as the recipient of its 2018 Doug Young Lifetime Achievement Award for his service to the university and community.

Hood, whose career spans six decades with posts in radio, banking, human resources, higher education and government service at the city, county and state levels, will be honored at the chamber’s annual “Business at its Best” event Thursday, Jan. 31, at the Embassy Suites Murfreesboro Hotel & Conference Center.

In 2014, the chamber also honored Hood as its Business Legend of the Year.

On Jan. 31, the chamber also will recognize Saint Thomas Rutherford Hospital President and CEO Gordon Ferguson as 2018 Business Legend of the Year, real estate executive John Harney as the 2018 Business Person of the Year and Smyrna Police Chief and MTSU alumnus Kevin Arnold as recipient of the Leadership Rutherford 2018 Pinnacle Award.

Before Hood accepted his current position at MTSU, he represented the 48th District in the Tennessee House of Representatives from 1996 to 2008. He spent 20 years before that elected service as vice president of marketing for SunTrust Bank; 10 years at MTSU as the first director of development, followed by assistant to the president; six years as personnel manager for Samsonite Corporation; and 10 years in radio with WGNS-AM and WMTS-FM.

Hood was a member of the Rutherford County Quarterly Court, now the County Commission, from 1968 to 1978 and the Murfreesboro City School Board from 1967 to 1983.

Hood’s history of community service is one that spans decades. His affiliations include the Exchange Club of Murfreesboro, United Way of Rutherford and Cannon Counties and Read to Succeed, along with the local Chamber of Commerce, where he has served as a diplomat for the past 18 years.

He was the 2012 recipient of the Murfreesboro City Schools Foundation’s Excellence in Education Award. Hood was inducted into the Tennessee Journalism Hall of fame in 2016, and in 2017 he was honored with the American Red Cross “Hero” Award.

The Lifetime Achievement Award is named for the late Murfreesboro vice mayor and community leader, who also was an MTSU alumnus. Reservations for the 11:30 a.m. Jan. 31 event are $50 for chamber members and $65 for non-members. To reserve a seat, contact the chamber at 615-893-6565 or visit www.rutherfordchamber.org. 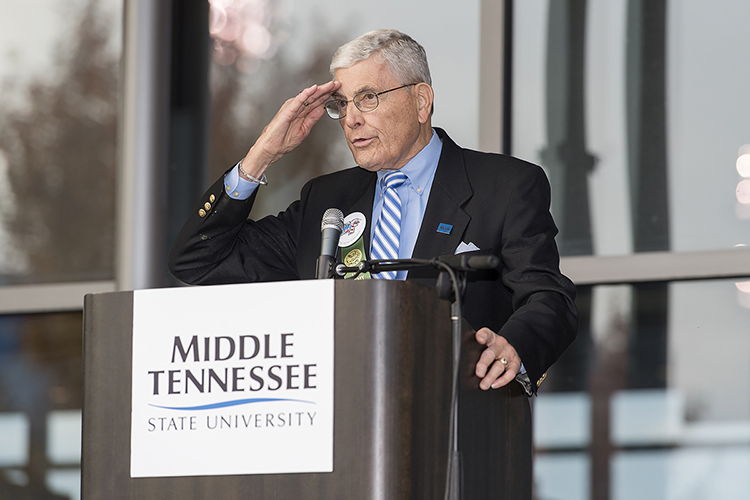 John Hood, MTSU alumnus and director of government and community affairs for the university, salutes during the November 2017 ceremony where he received MTSU’s Joe Nunley Award, presented to a veteran each year for his or her service to the country and during his or her career after leaving the military. Hood was announced Jan. 3 as the recipient of the 2018 Doug Young Lifetime Achievement Award from the Rutherford County Chamber of Commerce for his service to the community and university. (MTSU file photo by Andy Heidt)