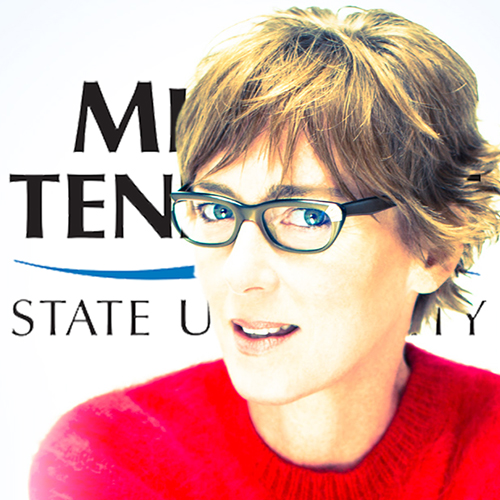 Multitalented singer/songwriter Jonatha Brooke will visit MTSU Thursday, Nov. 3, for a day of events capped by a public interview with insights about songwriting, studio production and performing.

Brooke, whose distinctive voice has been on records, radio and TV and film soundtracks for more than 20 years and who released her ninth solo album, “Midnight Hallelujah,” earlier this month, will first demonstrate studio recording techniques to MTSU students with her co-producer, MTSU recording industry alumnus Mark Hornsby.

Then, at 7 p.m. Nov. 3, Brooke will sit down with Beverly Keel, chair of MTSU’s Department of Recording Industry, in the Keathley University Center Theater to discuss her songwriting, performances and placing her songs in various media.

The interview, a “Writers in the Round” event, is open to the public. A searchable, printable campus parking map is available at http://tinyurl.com/MTSUParkingMap.

Brooke began performing in the late 1980s with her fellow Amherst College student, Jennifer Kimball, and the pair soon became known as “The Story.” Their folk-rock teamwork led to two albums and a popular single, “So Much Mine,” before the women embarked on independent careers.

Frustrated after losing her recording contract in the middle of a concert tour, Brooke created her own label, Bad Dog Records, in 1999 for her albums. She branched out into other vocal work, too, turning up in the Goodyear Tire commercial jingle, “Serious Freedom,” and in two songs, “I’ll Try” and “Second Star to the Right,” on Disney’s “Return to Never Land” soundtrack.

Brooke also created and performed an acclaimed one-woman off-Broadway play in 2014, “My Mother Has Four Noses,” capturing her relationship with her mother, who had dementia. She continues to shares her abilities through songwriting forums and live performances.

Brooke’s visit to MTSU is sponsored by the Tom T. Hall Writers Series, the Center for Popular Music at MTSU and the Department of Recording Industry, all part of the university’s College of Media and Entertainment.

The Center for Popular Music is one of the nation’s largest and richest repositories of research materials related to American vernacular music.

To learn more about Brooke, visit her website, www.jonathabrooke.com. For more information on MTSU’s College of Media and Entertainment and its programs and events, visit www.mtsu.edu/media.