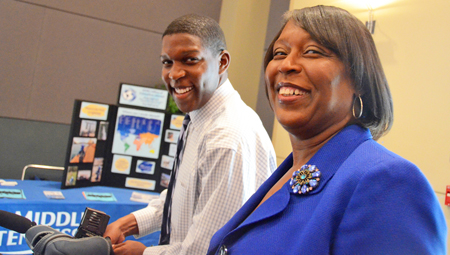 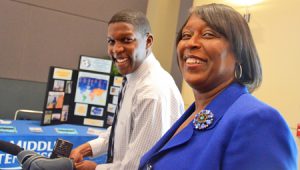 WCYB-TV News5 general assignment reporter Jonathan Radford, left, is shown with his mother, Dr. Angela Radford Lewis, Sept. 23 during the Middle Tennessee State University True Blue Tour event at The Millennium Center in Johnson City. Both are MTSU alumni. Radford graduated from the College of Mass Communication earlier this year, and worked as an intern at both NBC News in New York and WSMV Channel 4 in Nashville. Lewis, associate dean and professor in the East Tennessee State University College of Education, received two bachelor’s degrees and one master’s from MTSU. (Photo by MTSU News and Media Relations)