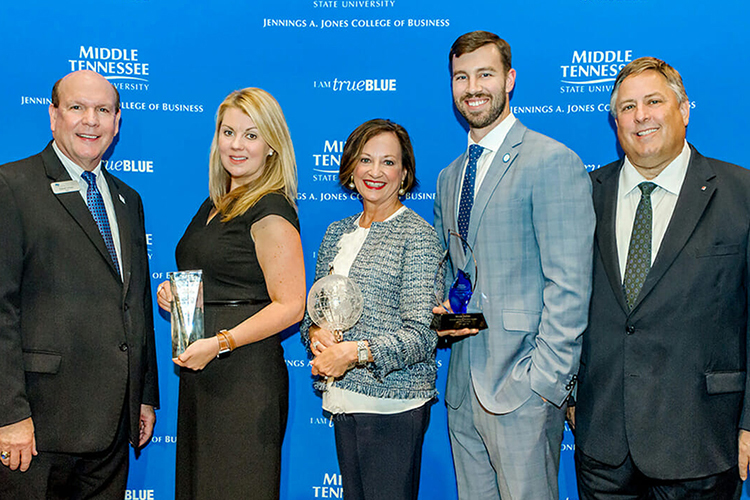 MTSU’s Jennings A. Jones College of Business again honored a group of business people with special awards in recognition of their contributions to business and industry.

The four honorees were formally recognized at an awards reception Thursday, Sept. 27, as well as at the Jones College-hosted Leadership Summit nationally known speakers John O’Leary and Mel Robbins held Friday, Sept. 28, at the Embassy Suites Hotel and Conference Center.

David Urban, dean of the Jones College of Business, told those attending the reception that the awards recognition “provides us an opportunity to feature the characteristics of people who are successful leaders, innovators, and entrepreneurs, so that we might learn from them as we continue to develop the Middle Tennessee region as a hotbed of economic activity.”

• Angie Grissom is the recipient of the Jennings A. Jones College of Business Exemplar Award. This award is presented to a Jones College alumnus who has “walked in the shoes” of current students and whose personal and professional accomplishments demonstrate that future MTSU graduates can also achieve great things.

Grissom is an owner and president of Nashville-based The Rainmaker Companies, a training, consulting and alliances firm which serves the accounting industry and now is also newly serving the legal industry. Grissom graduated from MTSU in May 2000 and started with Rainmaker in August 2001. She worked her way up through the organization from marketing consultant to senior consultant, vice president of consulting, chief operating officer, and then transitioned into the role of president five and half years ago.

Grissom is a regular contributor to industry and business publications. She was published in a national “Ask Angie” column for several years and is the “She” in Accounting Today’s column known as “He Said, She Said.” She is a host and a regular guest on Nashville’s Channel 4 “Score on Business.”

• Murfreesboro Mayor Shane McFarland, who was out of town and unable to attend the ceremony, is the recipient of the Joe M. Rodgers Spirit of America Award. This award is presented to an individual who has demonstrated the highest ideals in keeping with the American spirit of innovation, entrepreneurship and commitment to others.

A 1997 MTSU graduate and former Student Government Association president, McFarland was elected to the Murfreesboro City Council in 2006. He was elected mayor of Murfreesboro in 2014, the youngest mayor in the city’s history, and was unopposed in his re-election this year. McFarland has helped guide the 13th fastest growing city in the country with programs for renewed downtown development, recruiting corporate jobs, enhanced parks and recreation offerings, additional public safety facilities and a renewed focus on customer service.

McFarland also owns Shane McFarland Construction, a custom residential and commercial construction firm. His company has been recognized nationally as one of the industry leaders in construction and is a member of the prestigious Master Custom Builder Council of Tennessee.

• Deborah Thompson is the recipient of the Jennings A. Jones Champion of Free Enterprise Award. This award is presented to an individual whose achievements “are in keeping with the highest traditions of the American system of free enterprise” and who is a role model in business, professional and personal achievements.

Thompson is vice president of agency-sales for the Southeastern market area for State Farm. She is responsible for agents and agency field leadership in the states of Tennessee and Alabama, and the Commonwealth of Kentucky. Thompson joined State Farm in 1982 as an agent in Virginia, and has held various executive positions in Virginia and North Caroline.

A graduate of the College of William and Mary in Williamsburg, Virginia, Thompson currently sits on the Board of Directors for the United Way of Rutherford and Cannon Counties and the MTSU Foundation Board of Trustees. She has also served on the Saint Thomas Rutherford Hospital Board of Directors.

• Brian Walsh is the recipient of the Jones College Young Professional of the Year Award. This award recognizes someone who, at a relatively young age, has already been a role model whose accomplishments are outstanding and an inspiration to others, but who also has the potential to rise to even greater heights in personal and professional life.

Originally from Mount Pleasant, Tennessee, Walsh graduated from MTSU in 2009. While at the university, he developed a passion for service that was facilitated by involvement in student organizations and community service opportunities. After graduation, he began his career with the university, working in the Division of Student Affairs.

In 2011 he transitioned into a career with a new financial services firm, Cunningham Financial Group. He now serves clients in the areas of risk management, financial planning, and wealth management. Walsh has served on the boards of the Blue Raider Athletic Association, the MTSU Young Alumni, and most recently as the 2017-18 President of the MTSU National Alumni Association.