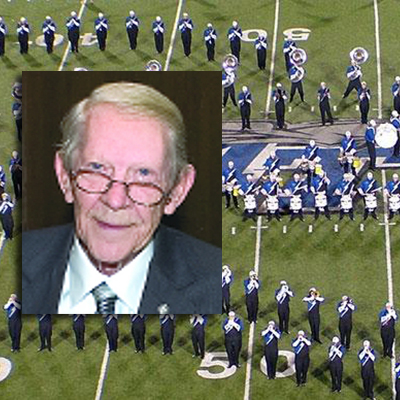 Funeral services were held May 10 for Joseph T. Smith, MTSU director of bands emeritus, MTSU alumnus and 50-year music educator, who passed away May 7.

Smith, 86, a native of Tullahoma, Tenn., earned his bachelor’s and master’s degrees from MTSU following his service as a U.S. Marine Corps sergeant in World War II.

He  joined the MTSU family in 1957 after teaching music in Tennessee and Georgia high schools and became director of bands at MTSU in 1976. Smith retired from the university in 1993. His complete obituary is available here.

Joseph T. Smith, then director of the MTSU Band of Blue, is captured in action in photos included in this feature story in the March 1975 edition of Midlander, the MTSU yearbook. Click on the page to see a larger version. (Midlander courtesy of the MTSU Digital Collections, James E. Walker Library)

During his 36-year tenure at MTSU, Smith established the university’s renowned “Band of Blue,” which continues its award-winning national tradition today. In 1962, he founded the Contest of Champions high-school marching band competition, which became the model for the marching band competition movement and draws thousands of music lovers to MTSU each year.

Smith also founded the Tennessee Valley Winds, a community band that performs throughout Middle Tennessee as well as by invitation in national music clinics.

In 1985, Smith was named as one of MTSU’s Distinguished Alumni. In 2006, the university honored him again by naming the School of Music’s large instrumental rehearsal hall, located inside the Wright Music Building, as the Joseph T. Smith Rehearsal Hall.

Smith, who has been honored multiple times by organizations including the National Band Association for his contributions to music education, was preceded in death by his parents and one son.

He is survived by his wife of 66 years, Billie Odom Smith, a former assistant dean for women’s affairs at MTSU; two children; five grandchildren and two great-grandchildren.

You can read a transcript of a 1995 interview with Smith in the Albert Gore Research Center’s oral history archives. You can learn more about the MTSU Band of Blue and the rest of the university’s student bands at www.mtsu.edu/bands.

Memorials to honor the late director may be sent to the MTSU Foundation, 1301 E. Main St., P.O. Box 109, Murfreesboro, TN, 37132. Donors should clearly designate their choice of memorials on their checks: the Middle Tennessee State University Band of Blue Scholarship Fund, or the Joseph T. Smith Memorial Fund. The latter will be used by the MTSU Bands to commission a special piece of music to honor Smith.

For more information about memorial donations, contact Jennifer Stembridge, university bands coordinator in the School of Music, at Jen.Stembridge@mtsu.edu or Meredith Kerr, director of development for MTSU’s College of Liberal Arts, at Meredith.Kerr@mtsu.edu.