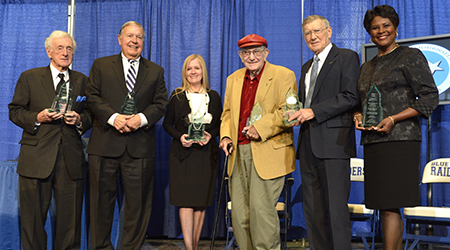 Representing nearly three centuries of combined journalistic excellence, the first members of the Tennessee Journalism Hall of Fame proudly stood before family, friends and colleagues at MTSU today to encourage the next generation of media professionals.

“This is the first all-inclusive hall of fame in the state to showcase talented media professionals in all areas,” John Hood, MTSU director of governmental and community affairs, told the crowd assembled inside Murphy Center for the ceremony.

The first members of the Tennessee Journalism Hall of Fame gather for a photo after an April 26 ceremony in MTSU’s Murphy Center celebrating their accomplishments. From left are inductees John Seigethaler, Chris Clark, Karen Miller representing her late husband Dan Miller, Dean Stone, Bill Williams Jr. and Anne Holt. The new Hall of Fame will be housed in the Center for Innovation in Media inside the Bragg Mass Communication Building at MTSU. (MTSU photo by Andy Heidt)

“These people all put Volunteer State journalism on the world map of credibility. We also appreciate that the hall of fame is at MTSU, because its College of Mass Communication is recognized globally for producing all kinds of media professionals.”

The hall’s inaugural inductees include:

Each of the inductees had words of thanks for their supporters as well as encouragement for the students gathered for their own annual awards ceremony.

Holt reminded the young people of their “obligation” to ensure the accuracy of their news stories. Miller’s wife, Karen, recalled the “flurry of information to be sifted through” in the newsroom where her husband worked, often with their young daughter at his feet under his anchor desk, “working” alongside her dad.

Seigenthaler, who started in 1948 as a copyboy in the newsroom of the newspaper he’d later lead, noted the dedication of the media industry people around him, saying, “For most of my professional life, I’ve interacted with all the people up here in this inaugural class with me.”

Stone, who continues working at his newspaper at age 88 and has founded and contributed to numerous service organizations in Blount County, said that his journalism work was a part of his determination to be of service to the community. And Williams, who has 28 members of his extended family working in some form of media outlet or printing and still serves as the paper’s chief editorial writer, joked that he has a granddaughter in college radio to continue the family tradition.

The new Tennessee Journalism Hall of Fame at MTSU, which was officially unveiled in October 2012 after four years of planning, will be housed at the John Bragg Mass Communication Building inside the Center for Innovation in Media.

The hall was the brainchild of Hooper Penuel, a retired lieutenant colonel and public information officer for the Tennessee National Guard, and newspaper columnist Dan Whittle.

“It was an idea born about four years ago of a backyard visit,” Hood explained to the crowd, “to include all aspects of modern journalism, not only print, radio and TV but electronic media and public relations in Tennessee.”

MTSU journalism professor Larry Burriss joined the pair in their efforts, becoming president of the hall’s board of directors with Whittle as vice president and Penuel as secretary/treasurer.

After the special Hall of Fame induction, the College of Mass Communication recognized another group of MTSU alumni and friends as members of its “Wall of Fame.”

The Wall of Fame began in 2000 as a way to both honor successful mass-communication graduates and inspire current students to continue working toward their goals. Each year, each of the college’s departments solicits nominees from faculty, chooses an honoree and submits his or her name to the dean. The inductees are added to the Wall of Fame roster at the college’s annual Awards Day for students.

The 2013 Mass Communication Wall of Fame inductees bring the total membership to 75. They are:

The College of Mass Communication capped today’s ceremony by honoring more than 100 students in the Department of Electronic Media Communication, School of Journalism, Department of Recording Industry and graduate studies program for their scholarship and professional accomplishments.

“This all has been an example to our students that professionalism and talent can be recognized and rewarded,” Mass Communication Dean Roy Moore said.

“This year we are fortunate to be presenting our students with more than $35,000 in scholarships and awards, all funded through private donations.”