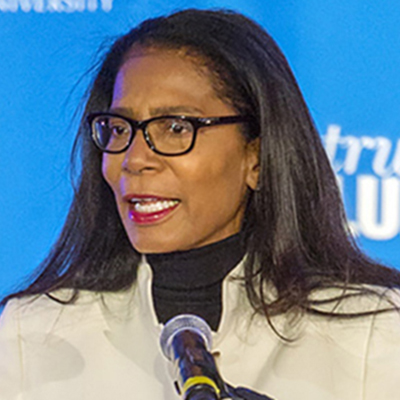 Getting the message right was the message crisis management expert Judy Smith delivered at MTSU.

Smith, who was the inspiration for the character of Olivia Pope on the ABC television series “Scandal,” ventured into the audience to field questions from students and others in the James Union Building March 28 during her National Women’s History Month keynote address.

During a wide-ranging career that includes stints in the George H.W. Bush administration, at NBC and in the office of independent counsel Lawrence Walsh during the Iran-Contra scandal, Smith gleaned a wealth of knowledge that enabled to found her own firm, Smith and Company, with offices in Washington, D.C., and Los Angeles.

“What we really do is try to help corporations, associations and individuals navigate problems as they go along and try to protect their brand and their reputation,” Smith said.

Noting that she had worked all weekend before the Monday night event, Smith explained, “It’s the kind of career that is not for the faint of heart … Crisis is not a 9-to-5 job. It’s a 24/7-plus kind of job.”

Smith advised students eager for success after graduation to pay attention to what they do on social media, be open to trying new things and have clarity about what they want to accomplish.

“You should never underestimate hard work,” Smith said when asked what she had learned from her various jobs. “I know it’s not the cool, hip, ‘in’ thing to do, but hard work really pays off.”

When asked what kind of people she would hire for her firm, Smith said she looks for strategic thinking and discretion. She added that it’s important for managers to get outside their comfort zones and not surround themselves only with people who will validate their established views.

“I tend to look for people that are not like me, people who don’t think the way I think, and I think that is really important,” Smith said.

“For me, the cab driver who dropped me off is just as important as the president of the United States,” she said. “There’s no distinction in that.”

Actors Kerry Washington and Tony Goldwyn appear in a scene from the hit ABC drama “Scandal.” Washington’s character, Olivia Pope, is based on the real life of Judy Smith, who delivered the keynote address March 28 for MTSU’s observance of National Women’s History Month. (Courtesy of ABC)