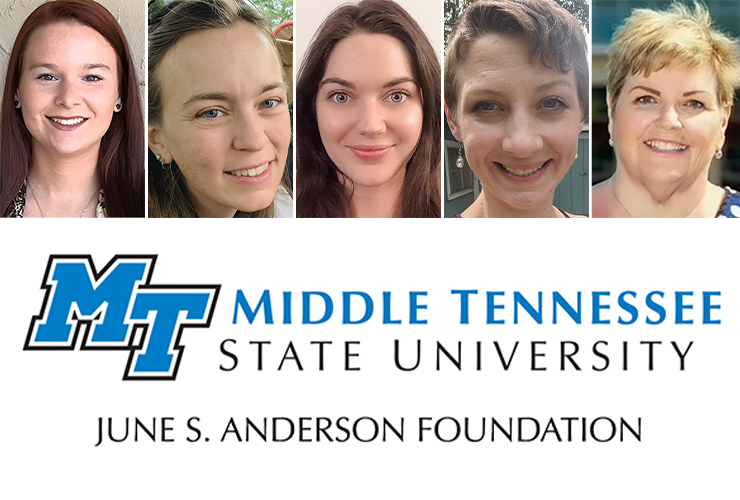 Five stalwart young women whose educations have been interrupted to varying degrees by changes in their lives have renewed their MTSU educations with help from the June S. Anderson Foundation.

The board, which was created by and named for a revered MTSU chemistry professor, has awarded full-tuition scholarships to Casey Davis of Port Charlotte, Florida; Amanda Jolley of Murfreesboro; Marie McCord of Brentwood, Tennessee; Liz Sovine of Nashville, Tennessee; and Cynthia Torres of Franklin, Tennessee.

“These scholarships are awarded to women who are nontraditional students, most of whom are mothers,” said Mary Magada-Ward, chair of the foundation and chair of the Department of Philosophy and Religious Studies.

• Davis worked what she called mostly dead-end jobs after high school, eventually making a living in the insurance industry. However, she felt she had gone as far as she could without owning her own agency.

After participating in a discovery flight in which she was allowed to operate the plane’s controls, Davis fell in love with flying and became an aerospace major with an air traffic control minor. The Anderson scholarship will enable her to be a full-time student who works part-time instead of the other way around.

“There are so many different opportunities within the aviation industry,” Davis said. “So I’m kind of open to wherever my path takes me.”

• Jolley is a divorced mother of five ranging in age from 11 1/2 years old to 18 months. Three of her kids recently were diagnosed with celiac disease, a sensitivity to gluten that causes chronic inflammation of the upper small intestine. Her daughter was hospitalized in May, and Jolley is still paying the medical bills.

“Two of them so far are very sensitive to cross-contamination,” Jolley said. “They’re going to be testing my youngest, as well.”

After taking a 12-year hiatus to be a stay-at-home mom, Jolley found herself with a hodgepodge of credits in nursing/psychology and elementary education. Since pursuing one degree track or the other would take a lot of time, she decided on a major in integrated studies so her already acquired credits would not go to waste.

With the Anderson scholarship, Jolley expects to graduate with her bachelor’s degree in December.

• Originally, McCord was a linguistics major. While living in San Francisco, she befriended some people with technology careers.

“I took a job doing basic data management,” McCord said. “It got me thinking about data science.”

Now she’s a professional computer science major with a double minor in statistics and mathematics. In fact, she just completed a summer research internship in Oak Ridge.

“I was in college on and off for my early 20s,” McCord said. “So I’ve exhausted all other routes financially. Actually, for a period of time, I wasn’t sure I was going to graduate.”

• Sovine also had prior college experience that ended when the money ran out. She returned to MTSU this year because she could pay for a semester with her federal COVID stimulus money. For the environmental science major, the Anderson scholarship arrived just in time.

“I wasn’t really sure how I was going to be able to afford this coming semester,” Sovine said. “The fall will be my final semester.”

Sovine said she wants to work in either federal or state land management and deal with renewable energy issues.

• Torres became a psychology major after going through a painful divorce about 10 years ago. Devastated, she began seeing a mental health counselor.

“Little by little, I started realizing the value of just understanding yourself,” Torres said.

Now Torres wants to be a clinical psychologist. She said winning a scholarship made her realize she is on the right path in life.

“It gives me the opportunity to even consider grad school,” she said.

While it is unusual for the foundation to have five scholarship winners in one year, Magada-Ward pointed out that these unusual times have produced unusual circumstances.

“Because we had a pandemic-induced hiatus last year, the board is especially happy to give out twice as many full-tuition scholarships this year,” Magada-Ward said.

For more information about the June S. Anderson Foundation Scholarships, go to http://capone.mtsu.edu/jsa/ or contact Magada-Ward at 615-898-5174 or mary.magada-ward@mtsu.edu.