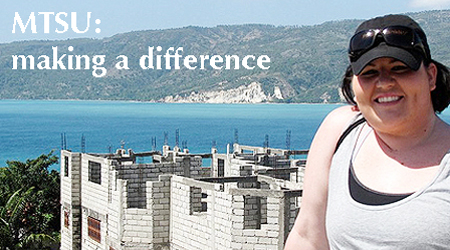 Former MTSU student Katie Erie, who was working at an orphanage in Haiti when a devastating earthquake rocked the Caribbean nation two years ago on Jan. 12, 2010, will return to Haiti to manage an orphanage there.

The 23-year-old former social-work major from Franklin, Tenn., will launch a facility to house parents and special-needs children in Neply, Haiti. The new orphanage will be operated under the auspices of myLIFEspeaks, a 501c3 organization created in 2006 by Mike and Missy Wilson of Franklin.

Erie explained in a telephone interview from Neply how special needs children are treated as pariahs in Haiti.

“There is not very much respect for them,” Erie said. “They are shunned, locked away, not really loved, because they are considered cursed. My dream is that one day they will be respected like everyone else.”

Although her humanitarian work interrupted her college career, Erie said her work in Haiti is informed by her classroom experiences with Dr. Chuck Frost, a social-work professor at MTSU.

“His outlook on life is inspiring and very encouraging and made me feel like there’s no reason why I can’t do things,” Erie said. “I definitely know more now about how to communicate effectively with different people.”

MyLIFEspeaks currently is renting the facility Erie will manage. The group is raising money to build its own campus, which includes plans for housing, a community center, recreational facilities and a cemetery.

Haiti has a population of more than nine million people. Nearly 500,000 Haitian children are orphans, and one in five of those children have special needs.

The magnitude-seven 2010 earthquake, which destroyed the orphanage where Erie had worked, killed nearly 223,000 people and left nearly 1.5 million homeless.

To listen to “Katie in Haiti,” Gina Logue’s “MTSU on the Record” interview with Erie about her experiences during the earthquake, go to www.mtsu.edu/news/podcast/podcast2010.shtml and click on “January 31, 2010.”

For more information about myLIFEspeaks and its humanitarian outreach efforts in Haiti, go to www.myLIFEspeaks.com.