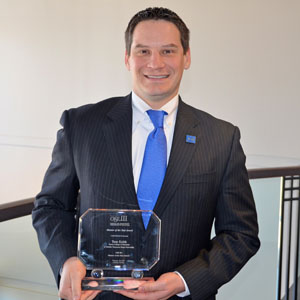 An MTSU development director has been recognized for his outstanding mentoring work by a regional higher education association.

Tom Keith, development director for the MTSU Jones College of Business, was this year’s recipient of the “Mentor of the Year” award by the District III conference of the Council for Advancement & Support of Education, also known as CASE. (Photo by MTSU News and Media Relations)

Tom Keith, development director for the MTSU Jones College of Business, was this year’s recipient of the “Mentor of the Year” award by the District III conference of the Council for Advancement & Support of Education, also known as CASE.

“I’m honored and humbled to be thought of by the CASE awards committee to receive this award,” said Keith, who has coordinated fundraising efforts for the Jones College since August 2012. “I wouldn’t be able to provide mentorship to others if I myself hadn’t been mentored by several individuals who have guided and provided support to me over the years.”

“I learn just as much from these experiences as they probably learn from me,” Keith added. “I enjoy being able to give back.”

Tom Keith accepts the “Mentor of the Year” award at the CASE District III conference held in Orlando, Fla., in February. (Submitted photo)

Burns nominated Keith for the inaugural “Mentor of the Year” award, one of three individual awards CASE gave out at the conference, held in February in Orlando, Fla. Keith has been asked to serve as co-chair for the apprentice/newcomers pre-conference session for next year’s conference in Orlando and to help establish a “mentor track” program in the future.

“This award reflects very favorably on Tom’s outstanding commitment to the Jones College, to MTSU and to the broader profession,” said David Urban, dean of the Jones College. “I am extremely proud of him for winning this wonderful award.”

Keith is a member of the 2014 class of Leadership Middle Tennessee, serves on the Susan G. Komen Foundation’s Grant Review Committee for the Nashville chapter, and is active with the Tennessee Advancement Resources Council (TARC), the United Way, and the Rutherford County Chamber of Commerce.