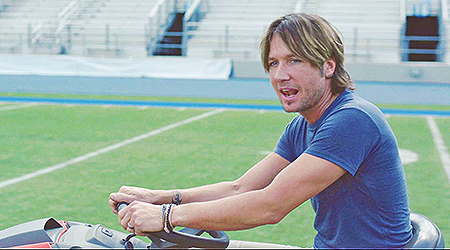 In this screen shot from the video for his latest single, “Little Bit of Everything,” country music star Keith Urban rides a lawnmower inside MTSU’s Floyd Stadium. The MTSU scenes were shot in June.

A good portion of the video of Urban’s latest single, “Little Bit of Everything,” was shot at and around Floyd Stadium.

The video shows Urban singing and playing his guitar in a creative, scene-shifting digital effect that features him inside a house that is sitting on a football field. He later moves to the locker room and bleachers, as well as other scenes outside the stadium.

MTSU students were hired as extras for the video.

Links to the video can found on www.KeithUrban.net, the singer’s website.

The Grammy and Country Music Association award-winning singer, also popular for his stint as a judge on Fox’s “American Idol,” filmed the video at MTSU on June 11.

His visit was first revealed on social media, including his own Facebook page, which then attracted coverage from The Daily News Journal in Murfreesboro.

Floyd Stadium was chosen as the video’s backdrop upon the recommendation of a former MTSU student, Derrick Holderby, who attended the College of Mass Communication in the early ’90s.

Holderby said the video’s director and creative team developed a treatment calling for Urban to be in a variety of settings, including a football stadium.

The location scout then was tapped to find a place that would allow Urban and the film crew to shoot the scenes with as little travel as possible. Many of the video’s other scenes were filmed near campus in Murfreesboro.

“Once they get the final creative on paper, they send that to me and I decipher it and try to find what they are looking for,” Holderby said.

“Having done this work long enough, and with my experience as a producer, you know that you have to minimize the company’s moves from point to point. That’s travel time that you could spend shooting.”

As an MTSU alumnus, Holderby knew Floyd Stadium would fit the bill.

“Needing a football stadium sort of limits your list,” he said.

Once Holderby decided to recommend Floyd Stadium to Urban’s team, it fell to Joe Bales, MTSU’s vice president for development and university relations, to assist in securing the facilities.

One of the challenges, Bales said, was keeping the project quiet so Urban could get the job done with a minimum of interruptions and distractions.

“Keith was great,” he said. “He was very gracious and very complimentary. And we were pleased a good number of our students were involved in the production.”

Country music star Keith Urban walks outside MTSU’s Floyd Stadium in this scene from his latest single, “Little Bit of Everything.”