Y'all Break a Leg 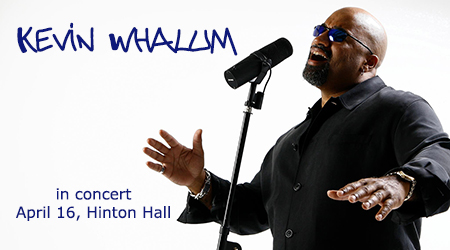 The free public event is set for 7:30 p.m. in the Hinton Music Hall inside the university’s Wright Music Building.

Vocalist Kevin Whalum will jazz up campus on Tuesday, April 16, with a free public performance in the Wright Music Building that also will feature the MTSU Singers and Grammy award-winning music professor Cedric Dent. (Photo courtesy of Kevin Whalum)

Whalum, a Memphis native whose countless musical influences range from Al Green and Ella Fitzgerald to The Manhattan Transfer and Lynyrd Skynyrd, recently returned from a visit to South Africa, where his next CD is scheduled for worldwide release this summer.

His first two releases, “Timetable” and “One Life to Love,” are classified as jazz but feature elements of R&B, soul and Christian music. Whalum’s voice has been described as “butter” by jazz keyboards great George Duke, with whom Whalum’s co-written several songs.

Whalum, who also is the younger brother of jazz saxophonist Kirk Whalum, first found his voice in their father’s church. Initially going into business after college, he ultimately turned his love of music into a full-time career as a live and session vocalist in Nashville and then as a touring artist.

The MTSU Singers, who also will perform Tuesday night, are a student ensemble that performs jazz, Broadway and contemporary music, focusing on developing stage presence and vocal skills during their tenure in the group.

The singers are led by Dent, a member of the Grammy Award-winning gospel/jazz group Take 6 who has taught in MTSU’s School of Music since 2004.

Dent, who received his own Grammy in 1992 for his work on several musical arrangements on the recording “Handel’s Messiah: A Soulful Celebration,” recently was named as the recipient of the 2013 Heritage Music Award by the National Association of Negro Musicians Inc. He’ll be presented with the award at NAMM’s annual convention in Nashville in July.

A parking map of MTSU arts venues, including the Wright Music Building, is available at www.mtsu.edu/socialmedia/docs/mapforweb.jpg.

For more information on this and other MTSU School of Music events, call 615-898-2493 or visit www.mtsumusic.com and click on the “Concert Calendar” link.