Seddon returns to EYH for STEM.. 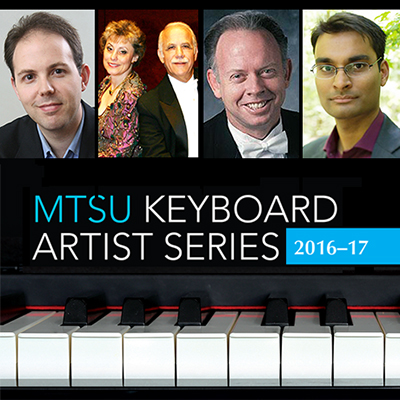 Clark’s 3 p.m. performance, set for the Wright Building’s Hinton Music Hall, launches the 2016-17 concert series, which features MTSU faculty and distinguished guest artists from around the world. A searchable campus parking map is available at http://tinyurl.com/MTSUParkingMap.

The professor will perform the complete “Op. 39 Études-Tableaux” by Sergei Rachmaninoff in honor of the work’s centennial.

“The études are incredible pieces, showcasing the breadth of Rachmaninoff’s wizardry as a pianist and composer,” said Clark, who also serves as president of the Middle Tennessee Music Teachers Association.

“One can hear magnificent depictions of Russian bells, the incorporation of chant-like melodies and an abundance of pianistic fireworks — all trademarks of Rachmaninoff’s music. The set is drenched in powerful imagery and imagination throughout.”

Clark noted that the composer wrote the “Études-Tableaux” — French for “study pictures,” or what Rachmaninoff called “picture pieces” designed to evoke images via music — in 1916 and 1917 and published the set in 1917. They were the last pieces Rachmaninoff composed in his homeland before the Russian Revolutions of 1917 forced him to flee forever.

“I’ve been in love with Rachmaninoff’s music for as long as I can remember. This performance will be my first of the complete set,” the professor noted.

Clark, a prizewinner in numerous competitions, has performed as a soloist, chamber musician and concerto soloist throughout the United States as well as in Belgium, Italy and South Korea. His performances have been broadcast on U.S. public radio and South Korean TV.

The 2016-17 Keyboard Artist Series also features three more concerts in Hinton Hall, including an Oct. 2 performance by special guests the Pridonoff Duo; a Jan. 29 recital by piano professor Charles Asche of the University of California, Santa Barbara; and a Feb. 27 concert by Arunesh Nadgir, coordinator of keyboard studies for MTSU’s School of Music.

For more information on the Keyboard Artist Series at MTSU, visit www.mtsu.edu/music/keyboardseries.php.