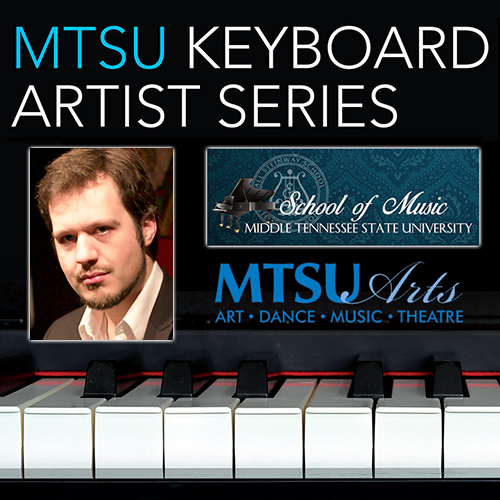 The award-winning Nashville musician will perform at 8 p.m. Feb. 27 in the Wright Building’s Hinton Music Hall. A searchable campus map is available at http://tinyurl.com/MTSUParkingMap.

One of Nashville’s most in-demand pianists, Endahl has performed in groups led by Jeff Coffin, Rahsaan Barber, Duffy Jackson, Christina Watson, Marcus Finnie, Dara Tucker and many others. He also has shared the stage with legendary jazz figures like Arthur Blythe, Jimmy Heath, Jane Ira Bloom, Dave Liebman and the late Marcus Belgrave.

Endahl studied piano at the University of Michigan, where he earned his master’s degree in improvisation in 2012. In 2008 he was a Bösendorfer Montreux Jazz Solo Piano Competition semi-finalist, and from 2008 to 2013, he was a member of the music faculty at Hillsdale College. He has presented performances, compositions and research at numerous international music association meetings and performed at Jazzanooga, the Detroit International Jazz Festival and the avant-garde music festival Edgefest in Ann Arbor, Michigan.

From 2010 to 2013, Engdahl hosted jazz and experimental music radio programs on WCBN-FM Ann Arbor, interviewing music legends Henry Grimes, Mayo Thompson, and Larry Austin. Since 2008 he has managed Sound Mansion Recordings, an outlet for his experimental music, and he also operates “A Shot in the Dark,” a blog devoted to his jazz and improvised music research.

Along with his classes at MTSU, Endahl teaches at Belmont University and the Nashville Jazz Workshop and maintains a private teaching studio.

For more information on the Keyboard Artist Series at MTSU, visit www.mtsu.edu/music/keyboardseries.php. For details on more MTSU School of Music events, call 615-898-2493 or visit the “Concert Calendar” link.