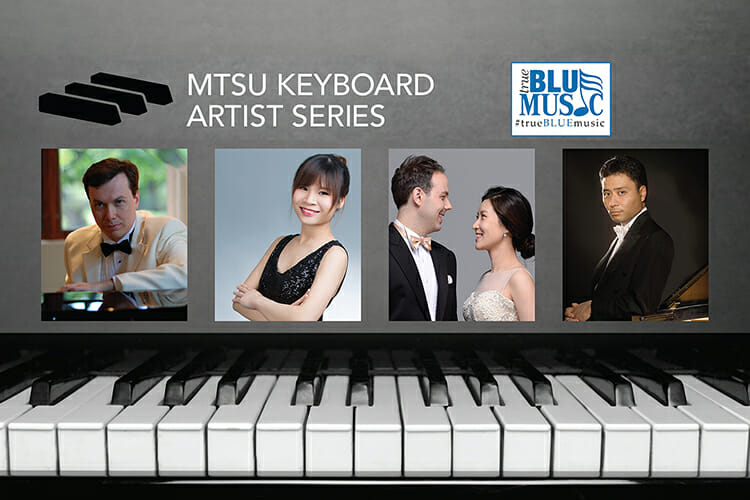 Internationally acclaimed pianist Kirill Gliadkovsky will help the MTSU School of Music open the fourth season of its popular “Keyboard Artist Series” with a public concert set for Sunday, Oct. 28.

Gliadkovsky’s performance will begin at 3 p.m. Oct. 28 in the Hinton Music Hall inside MTSU’s Wright Music Building. A campus map is available at http://tinyurl.com/MTSUParking.

Admission is $10 for the general public and $5 for seniors; children under age 18 will be admitted free, as will MTSU students, faculty and staff with a current ID. Tickets are available at http://mtsuarts.com and at the door.

The 2018-19 concert series, sponsored in part by the Steinway Piano Gallery of Nashville, once again features MTSU faculty and distinguished guest artists from around the world.

Gliadkovsky, a premier example, made his first public appearance in Moscow at age 6 and has continued to tour extensively throughout his native Russia and in Europe and North America.

Now a professor of piano and director of keyboard studies at Saddleback College in Mission Viejo, California, and an in-demand masterclass artist-teacher, Gliadkovsky has performed in Moscow’s Bolshoi, Maliy and Rachmaninoff Halls and the St. Petersburg Philharmonic’s Glinka Hall as well as in Italy, the United Kingdom, Poland, Mongolia, Canada, Japan and throughout the United States.

During his MTSU Arts-sponsored concert, this season’s inaugural guest will perform Mozart’s Fantasy in D minor; Beethoven’s Sonata in D minor, popularly called “The Tempest”; Schubert’s Impromptus Nos. 3 and 4 and the Fantasie in C major, popularly known as the “Wanderer Fantasy”; and two pieces from Brahms’ Op. 118.

“He will be presenting some of the greatest music written for the piano,” Dr. Arunesh Nadgir, coordinator of keyboard studies at MTSU, said of Gliadkovsky. “It will be a great way to kick off our 2018-19 series.

“As one can tell from some of the titles of the pieces, the idea of fantasy is prevalent throughout. I believe it will be fascinating for the audience to hear how each of these great composers capture the essence of fantasy in their own unique styles.”

Gliadkovsky has also been featured on numerous live TV and radio programs on networks from CBS and National Public Radio to Russian state media. A busy orchestral and choral conductor, he’s also recorded six albums so far. You can get a preview of Gliadkovsky’s work below, shared by Saddleback College.

“This competition is a bit like the Olympics of piano, so to present these two artists — one a gold medalist and the other a finalist — is a rare treat for the community,” the professor said of his fellow performers.

Nakamatsu also will help MTSU celebrate “Piano Day 2019” Saturday, March 30, by spending the day as the guest artist for and teaching two sessions of the Piano Masterclass Series. For more information on Piano Day 2019, visit http://mtsu.edu/music/masterclass.php.

For more information on the Keyboard Artist Series at MTSU, visit www.mtsu.edu/music/keyboardseries.php. For details on other School of Music events, call 615-898-2493 or visit the “Concert Calendar” link.