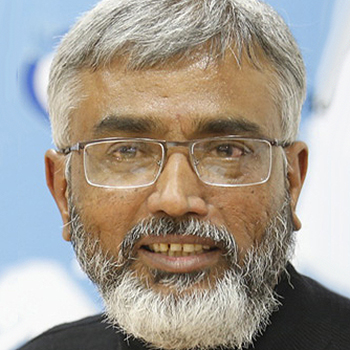 One of the world’s foremost experts on the Middle East is coming to MTSU Wednesday, Oct. 7, to share his insights with students and interested members of the public.

This event is free and open to the public, but public seating is limited.

Kumaraswamy was a research fellow at the Harry S. Truman Research Institute for the Advancement of Peace at the Hebrew University of Jerusalem from 1991 to 1999. He has taught at Jawaharlal Nehru University since September 1999.

“India has a large historical relationship to the Middle East,” said MTSU’s Foley, whose class focuses on the Arab-Israeli conflict.

“Millions of Indians have worked in the Gulf States. There has been trade back and forth during the imperial era all the way to the present.”

Foley said Israel’s relationship with India, which has a large Muslim population, was somewhat ambivalent in the 20th century until India introduced free market reforms in 1991.

Given the rich oil reserves in the Middle East and India’s industrialization, the commercial relationships in the region could determine how the 21st century develops, Foley said.

MTSU’s Department of History, the College of Liberal Arts, the Office of International Affairs and the Office of the Provost are sponsoring Kumaraswamy’s lecture.

A searchable campus parking map is available at http://tinyurl.com/MTSUParking2015-16 to locate Peck Hall. Off-campus visitors attending the event should obtain a special one-day permit from MTSU’s Office of Parking and Transportation at www.mtsu.edu/parking/visit.php.