Seddon returns to EYH for STEM..

'Psychology on the Couch': Lis.. 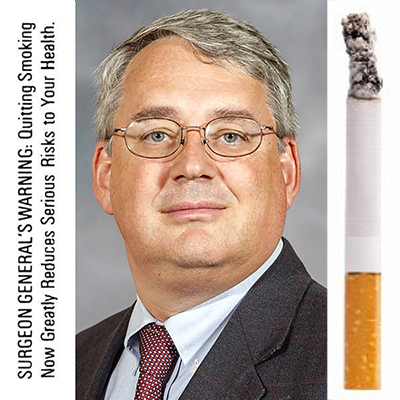 An historian who takes members of his own discipline to task for “historical malpractice” was the guest on a recent “MTSU On the Record” radio program.

Host Gina Logue’s interview with historian Louis Kyriakoudes first aired Aug. 22 on WMOT-FM (89.5 and www.wmot.org ). You can listen to their conversation below.

Kyriakoudes, the director of the Albert Gore Research Center, also is an expert in the history of the cigarette industry worldwide. He is one of only a handful of historians who have been called to testify on behalf of plaintiffs who sued the tobacco industry over the impact the product has on their health.

Using the industry’s own documents, Kyriakoudes has shown that tobacco manufacturers knew their product was addictive and hazardous to human health decades before the 1964 U.S. Surgeon General’s report that drew a direct connection between smoking and cancer.

Condemning what he calls “historical malpractice,” Kyriakoudes asserted that law firms representing the industry have practically told historians testifying for the industry what sort of evidence to provide for the trials.

“The tobacco industry’s efforts to buy expertise and to create a body of knowledge is a form of scientific denialism not unlike the climate change science denialism,” said Kyriakoudes, “but, because it deals with these legal issues of informed assumption of the risk, of knowledge, what people knew and when they knew it, it has a significant public policy and legal impact.”

This fall, Kyriakoudes will teach a class examining the history of the cigarette industry from pre-colonial times to the present day.