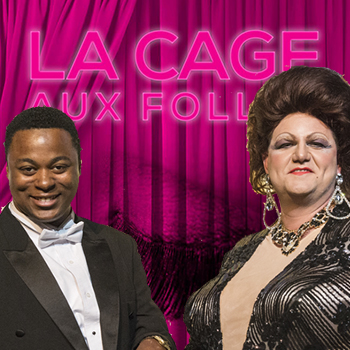 The curtain goes up at 7:30 p.m. April 22-25 for the multi-Tony Award-winning musical, which follows the foibles of a St. Tropez show-business couple whose son wants to marry a strait-laced politician’s daughter. A 2 p.m. matinee is set for Sunday, April 26.

Tickets for the MTSU Arts performances, sponsored by Ascend Federal Credit Union, are available online at www.showclix.com/event/LACAGE and at the theater box office an hour before curtain times.

“This show is more about family than anything else,” junior theatre major Saul Rodriguez said of the musical, which began as a 1973 French play, became a 1978 French-Italian film, was turned into a 1983 musical by Harvey Fierstein and Jerry Herman and remade into a 1996 comedy film starring Robin Williams and Nathan Lane.

“It’s very appealing to a lot of people. It’s a very fun show.”

Rodriguez, a resident of Lafayette, Tennessee, portrays a butler, Jacob, who works for a gay couple, Georges and Albin.

Georges, portrayed by junior theatre major Dominic Gillette, is the owner and master of ceremonies for a popular St. Tropez drag club, “La Cage Aux Folles.” His longtime partner, portrayed by MTSU costume design professor Tommy Macon, is the undisputed star of the drag-queen show in character as “Zaza.”

Click on the graphic for a link to purchase tickets April 22-26.

The pair’s son, Jean-Michel, tells the men he’s engaged to his girlfriend, Anne. Adam Moreno, a junior theatre major from Oak Ridge, portrays Jean-Michel, who is the result of Georges’ brief fling with a woman almost 25 years earlier, and Knoxville sophomore Delaney Keith is his new fiancée, Anne.

Jean-Michel and Anne want their families to get along, but that may be awkward because Anne’s father, Edouard Dindon, portrayed by theatre professor Crosby Hunt, leads an ultraconservative political group that wants to shut down all the drag clubs. Chaos, paparazzi, songs, dances and hilarity ensue.

“It’s such a family-oriented show, even though it’s not a traditional family,” said Keith, also a theatre major. “I think it’s great that this is being portrayed as so ‘normal,’ because the love is so real for everyone, whether it’s between my character and Jean-Michel’s character or between Georges’ and Albin’s characters.”

“That was one of the most important things about this show for me, with what’s going on now in Indiana and in Tennessee, when friends of mine friends who want to get married have to go out of state,” said theatre professor Deborah Anderson, a nationally acclaimed instructor who is directing “La Cage” to conclude her 34-year teaching career at MTSU.

“That was something I’ve talked with them about, how important this issue is at this time; I think 10 years ago, when there was no chance of same-gender marriage, it was just a big fun play then, but now I think it’s really meaningful. … This couple had been married for seven years when the play starts, and it’s just tossed off as not a big deal.”

Anderson and Hunt’s son Ian, a 2012 MTSU alumnus and professional musician in New York City, is returning to campus to provide percussion for the show.

Macon, who is normally in the backstage role of helping students create the professional-caliber costumes for which MTSU productions are renowned, said he lobbied hard for the role of Albin.

“Any actor that’s ever wanted to act, this is the most exciting role, the most challenging — it’s a pivotal role, and it challenges all three areas of your abilities (acting, singing and dancing). I wanted to do this show with Deborah before she left, so I asked her to please give me the opportunity, and she did.”

Gillette, who’s spent most of the last two academic years on the Tucker Theatre stage in productions including “A Doll’s House,” “American Tall Tales” and “Amen Corner,” said he’s finding his tuxedoed role as Georges a welcome challenge.

“There’ve been some nights where I’ve been battling with myself on how to portray him,” the Chattanooga resident said with a wide grin, “but this is definitely a fun show, and I think it’s a show that everyone will generally love. It’s a feel-good type of show, and that’s why it attracted me.”

“There’s a line in one of our songs that says ‘It’s rather gaudy but it’s also rather grand,’ and I think that perfectly describes everything about this show,” Rodriguez said.