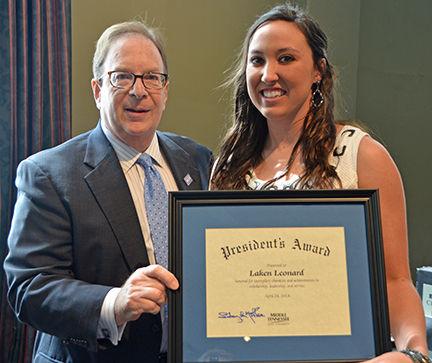 An outstanding member of the MTSU women’s basketball team who excels inside and outside the classroom is the 2014 recipient of the President’s Award.

Laken Leonard of Whitleyville, Tennessee, was presented the award Thursday (April 24) during the annual College of Basic and Applied Sciences Awards’ Ceremony in the James Union Building’s Tennessee Room.

Provost Brad Bartel presented the award to Leonard. Bartel filled in as President Sidney A. McPhee was out of town on university business.

The President’s Award is the most prestigious honor given to an MTSU student. The recipient must exemplify superior character and honor and have made achievements that, ideally, all students should strive to meet. The undergraduate student will have completed at least 90 credit hours, have a minimum 3.0 GPA, be recognized as a campus leader and have made significant contributions to the university community.

“I felt like it’s a great blessing and I felt honored,” said Leonard, discussing her initial thoughts after learning in late March she would receive the award.

“I really enjoyed MTSU as a whole,” said Leonard, a senior who will graduate Saturday, May 10, in Murphy Center. “God placed me here for a reason. The faculty here helped me. They were very understanding and patient. They have a huge passion for what they do. … As for life on campus, I love MTSU. It was a great experience.”

“The President’s Award signifies the highest academic achievement by a student at MTSU,” Bartel said.

“I am excited to know Laken is this year’s recipient,” McPhee said. “She is an exceptional student-athlete, who is committed to a number of student organizations and community efforts. I know she will have a great future and will be a great ambassador for the university.”

It marks the second award in the past two weeks for Leonard. She was among 16 Conference USA athletes to earn Winter C-USA Spirit of Service honors for not only her on-court and academic achievements, but also for involvement with the Fellowship of Christian Athletes, Student-Athlete Advisory Committee, Greenhouse Ministries, Special Olympics and more.

After being nominated for the President’s Award and interviewed by a Center for Student Involvement and Leadership awards committee, she was asked what advice she would give to the new crop of entering freshmen.

“Get out there and be involved from the start,” said Leonard, whose mother, Candice, attended the awards ceremony. “Focus on your studies to get a good start. Become a part of something — sorority or fraternity life.”

Leonard will graduate with more than a 3.75 GPA in biochemistry as a pre-pharmacy major. She plans to attend Belmont University’s College of Pharmacy starting in August.

“I think pharmacy’s my calling,” Leonard said, when asked if she might become a coach one day because she is taking three coaching classes (football, tennis and baseball) this spring. “I love camps and kids, but I don’t see myself as a coach in the future.”

Born in Lebanon, Tennessee, but a resident of Whitleyville (pop. 1,011) most of her life, Leonard was Class A Miss Basketball and most valuable player when Jackson County High School captured the 2010 TSSAA state championship in Murphy Center, which would become her home court.