Making Yourself at Home with L..

MTSU alumnus and outgoing Planning Commission Chairman Bob Lamb received a key to the city of Murfreesboro March 6 from Mayor Shane McFarland in recognition of his many years of service to the city.

Lamb (Class of ’69 and ’77) has been a driving force in the city of Murfreesboro’s growth, both as a commissioner since 1991 and as chairman since August 2000. The real estate veteran recently announced he is stepping down from leadership of the commission. 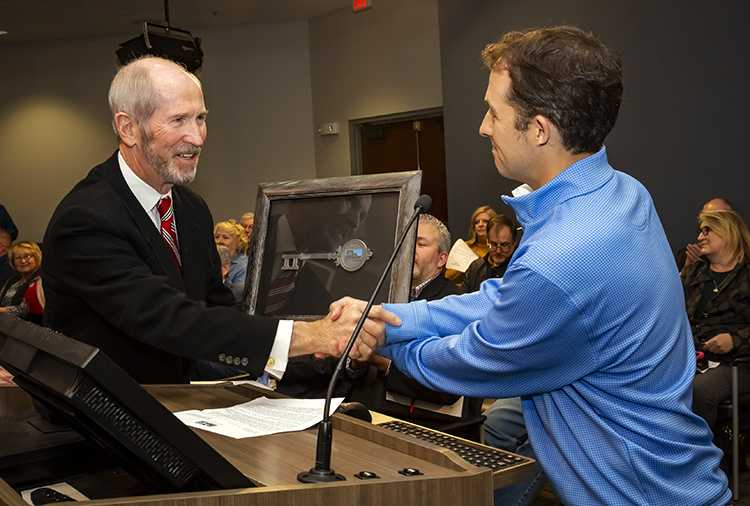 MTSU alumnus (Class of ’69 and ’77) and outgoing Planning Commission Chairman Bob Lamb, left, accepts a key to the City of Murfreesboro March 6 from Mayor Shane McFarland in recognition of his many years of service to the city. (Photo by Jim Davis/city of Murfreesboro)

“I can think of few leaders in our city who have had a greater impact on the growth and development of Murfreesboro than Bob Lamb,” fellow Blue Raider alumnus McFarland said in a city news release.

“Bob’s dedicated leadership in planning and development are written all over town, from the Gateway and the Avenue to the resurgence of historic downtown Murfreesboro. We owe him our deep gratitude and appreciation for the many years of service, time and energy serving as chairman of the Planning Commission.”

The vision, master planning and implementation for the Gateway now encompasses more than $1 billion in public and private investment.

In addition to overseeing the Planning Commission’s review process for countless site plans and subdivision plats, Lamb has presided over hundreds of public hearings for rezoning and annexations, the release states.

Other significant achievements that occurred under Lamb’s leadership on the Planning Commission include the adoption of: City-wide Design Guidelines, the Murfreesboro 2035 Comprehensive Plan, the 2040 Major Transportation Plan and the Historic Bottoms and North Highland Avenue small-area studies. Lamb has had a role in the review of almost every major project constructed in Murfreesboro over the last three decades.

As McFarland noted in presenting Lamb with the key to the city, “When Commissioner Lamb started on the commission, the population of Murfreesboro was approximately 40,000. Today it is closer to an estimated 150,000.”