In the News: Capitol Hill poli.. 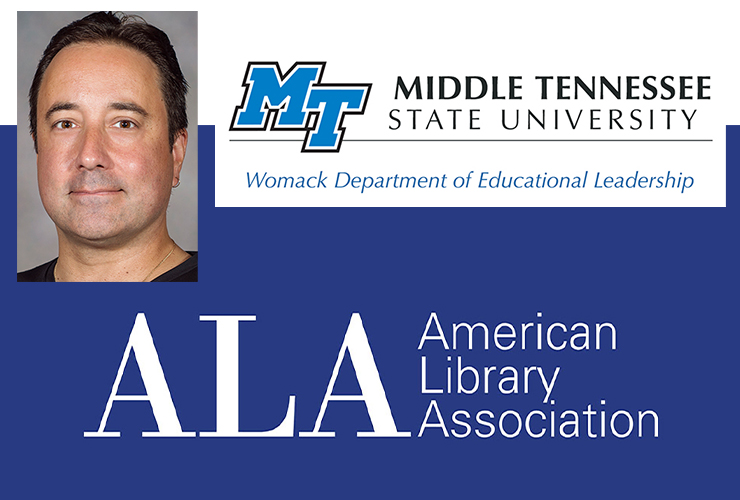 Getting the American Library Association to put its stamp of approval on a master’s degree program in library science is a lengthy process, but it’s worth it.

MTSU’s program has reached pre-candidacy status, a major step forward on the way to ALA accreditation.

To get that far, university officials had to submit a detailed plan for achieving candidacy status. This includes a timeline for reaching objectives, ways to determine whether the objectives have been met and plans for evaluating the program.

If MTSU makes it to the candidacy stage, an ALA committee will determine whether the program merits accreditation.

It’s a group effort, but the point person in the process is Frank Lambert, an assistant professor in the Womack Department of Educational Leadership.

The library master’s program is housed in the College of Education, which has tailored the degree track in a way that benefits nontraditional students who are busy with jobs and families.

The general requirements are 36 credit hours with 10 of the 12 courses totally online. The other two are hands-on field experiences in actual library work. The hands-on work must be performed in a school library to obtain an endorsement to work in schools. Students who prefer public or academic libraries can go to a variety of facilities.

“You take the courses online at times that are convenient for you because our courses are asynchronous, and then you set up your field experiences wherever you’re located,” Lambert said.

Lambert said he doesn’t want to turn the program into a degree mill, but he’d like for it to accommodate whatever the market will bear.

“Ideally, though, I would like to see us have at least 100 students if not more, and we’re not far from that goal as it is right now,” Lambert said.

One side effect of the COVID-19 pandemic has been to help increase enrollment in the program because it has been so convenient for people who have been affected adversely by changes in the economy.

“I have a feeling that, perhaps, some people who unfortunately have been … laid off or furloughed from their jobs are now looking at new educational opportunities while they’re in that hopefully temporary status,” Lambert said.

The very people who are in need of social service agencies themselves could end up providing some of those services if they become librarians.

“Starting in the early ‘70s, libraries started becoming not only holders of books and all those other sorts of materials,” Lambert said. “They also started to establish community information resource sectors.”

Lambert said libraries have become repositories for information about everything from how to get health insurance to where the homeless can get a bath and a hot meal. Some libraries, such as the ones in San Francisco and Melbourne, Australia, are taking it a step farther.

In fact, some universities are combining library science and social work into dual degree programs.

“The idea of a library being a relic of the past, I think, is total nonsense,” Lambert said. “We still have a lot of importance in today’s society. I think we need to be a lot louder and prouder about that as a profession.”

For more information about the master’s degree in library science program, contact Lambert at frank.lambert@mtsu.edu.