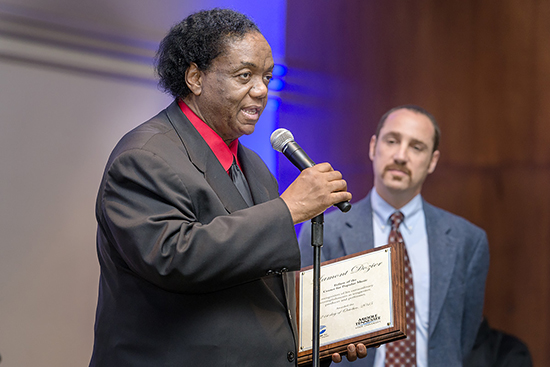 Rarely does an MTSU guest speaker have an audience dancing before he gets on stage, but Lamont Dozier‘s nonstop string of Motown hits playing over the speakers Wednesday, Oct. 21, was undeniable.

The man who co-created “Baby Love,” “Heat Wave” and “Can’t Help Myself,” among more than 50 No. 1 hits, danced along and took an enthusiastic, multigenerational crowd on a joyful trip through musical history — his own and much of America’s — with him Oct. 21 in MTSU’s James Union Building. 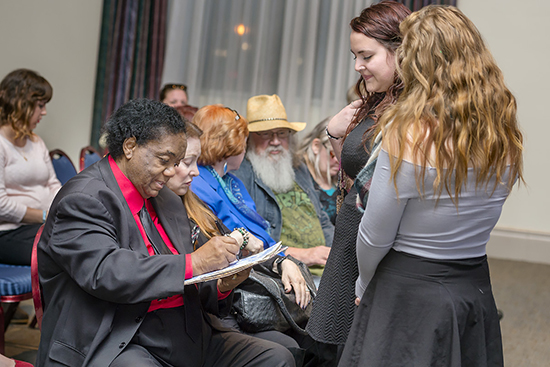 Motown music icon Lamont Dozier, left, signs the paper liner for a vinyl copy of “Motown: 25 #1 Hits from 25 Years” Wednesday, Oct. 21, for MTSU songwriting major Kayla Dunbar, center right, as her friend Heather Klein, a music business major, looks on. Seated next to Dozier is his wife, Barbara Dozier. The Doziers were at MTSU for a special discussion about his 50-plus-year career and for Lamont Dozier to be honored as the second Fellow of the Center for Popular Music at MTSU (MTSU photo by J. Intintoli)

Before the evening was over, the Rock and Roll Hall of Famer had the audience on its feet, singing along with him and surprise guest Nicole C. Mullen to “How Sweet It Is (To Be Loved by You)” as he danced on a small stage in the Tennessee Room.

“You have to have a great work ethic, seven days a week. You got to apply yourself. You have to believe that you can make it,” Dozier, the middle third of Motown’s iconic Holland-Dozier-Holland team, advised a student.

“Don’t listen to people telling you the business is this way or that way. You might be that one guy that breaks it wide open again, playing some stuff that blows everybody’s mind.”

”I’m still giving my expertise in the art of songwriting as well as being able to encourage people not to give up. If it’s their true love and destiny, they can make it,” Dozier responded while modestly expressing his gratitude for the fellowship.

“If a poor guy from Detroit, Michigan, can do it, anybody can do it. Thank you for this. This is wonderful and so much appreciated.”

Barry Gibb was the inaugural Fellow of the Center for Popular Music in 2013, honored, like Dozier, for his extraordinary accomplishments in music.

Dozier helped create the music of an era, alongside brothers Brian and Eddie Holland, with songs like the Four Tops’ “Baby I Need Your Loving,” the Supremes’ “Stop! In the Name of Love,” Martha and the Vandellas’ “Nowhere to Run,” Marvin Gaye’s “How Sweet It Is (To Be Loved by You)” and 50 more No. 1 hits.

During the celebration, the child poet, raised on his uncle’s boogie-woogie and his aunt’s Chopin, kept the MTSU audience laughing as he shared tales from his ongoing career.

His days as the teenage doo-wop leader of The Romeos, the raucous five years at the cinderblock home-turned-record label called Motown, his leadership at his own record label and million-selling record production work with American and British artists all were fair game for Dozier’s conversation with Fred Cannon, an MTSU recording industry professor and Dozier’s former label manager.

Motown music icon Lamont Dozier, left, expresses his thanks for being recognized as the second Fellow of the Center for Popular Music at MTSU Wednesday, Oct. 21, as Dr. Greg Reish, CPM director, looks on. Dozier was at MTSU for a special discussion about his 50-plus-year career and to be honored for his contributions to music and society. (MTSU photo by J. Intintoli)

“I used to come in every morning and sit down at the piano and get warmed up playing ‘Heat Wave,’” Dozier recalled of those heady years when he made $25 a week — “which amounted to about bus fare, plus they gave us lunch in the room upstairs”­ — for 18-hour days composing and producing hits for Berry Gordy’s stable of artists.

His inside story of the “fussing and crying” chaos that ultimately led to “Where Did Our Love Go,” the first in a string of No. 1 hits for who he called the poor neglected “no-hit Supremes,” left the MTSU crowd in gales of laughter.

The audiophiles in the audience particularly appreciated a story of Motown engineer Michael McClain’s unexpected contribution to the unique sounds of the Supremes’ “Reflections” and how taking apart an instrument added to the distinctive beat of the Four Tops’ “Reach Out, I’ll Be There.” 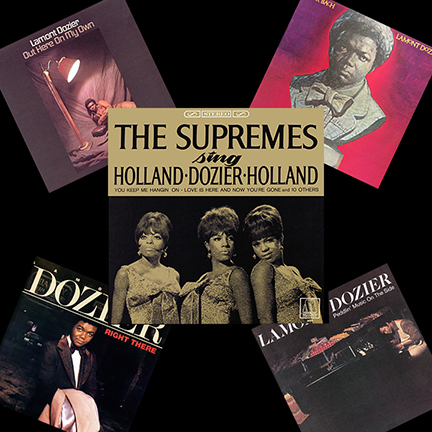 A collection of covers from Motown music icon Lamont Dozier’s solo career is shown with a Supremes album of Holland-Dozier-Holland hits in this photo illustration. Dozier was at MTSU Oct. 21 for a special discussion about his 50-plus-year career and to be honored as the second Fellow of the Center for Popular Music at MTSU.

Dozier and his partners left Motown and continued working together until the mid-’70s, when Dozier resumed his solo recording career.

He’s continued as a successful solo artist and producer, working with artists like Phil Collins, Eric Clapton and Simply Red, and served as a songwriting instructor at the University of Southern California as well as a leading advocate for copyright protections.

“Ideas are everywhere,” Dozier said before the event, while touring the Center for Popular Music. “You just have to know where to look, and listen.”

The Center for Popular Music at MTSU is a research center devoted to the study and scholarship of popular music in America.

Established in 1985 by the Tennessee Board of Regents as one of 16 Centers of Excellence across the TBR system, MTSU’s CPM maintains an archive of research materials stretching from the early 18th century to the present and develops and sponsors programs in American vernacular music.

The special Oct. 21 program was part of a yearlong series of events celebrating the launch of the College of Media and Entertainment at Middle Tennessee State University. For more information about the college, visit www.mtsu.edu/media.

You can listen to excerpts of some of the Holland-Dozier-Holland hits here at Dozier’s website. 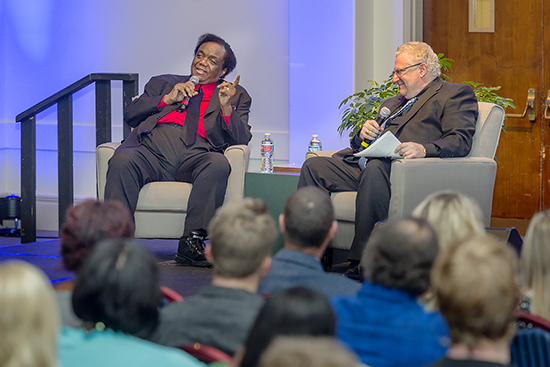