MTSU advising manager’s ‘above and bey... 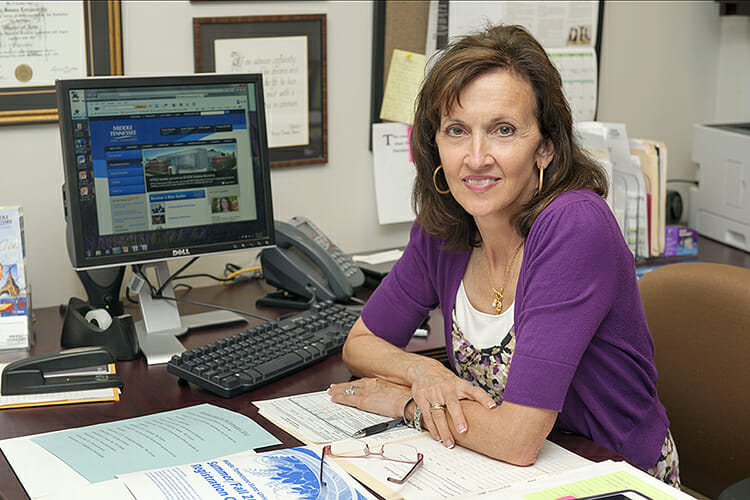 Students rely on MTSU academic advisers, who work tirelessly to guide them toward a successful educational future, even if that means countless appointments, emails and phone calls.

Among those advisers is College of Liberal Arts advising manager Lucy Langworthy, who will be recognized nationally for her diligence with an award from the National Academic Advising Association, or NACADA.

Langworthy will receive the 2018 Region 3 Excellence in Advising-Advising Administrator Award. NACADA prides itself as a professional association that promotes student success while providing opportunities for professional development, networking and leadership for a diverse membership.

“I have the utmost respect for any award given from the NACADA organization … I do appreciate the recognition of the leadership that I have provided for my first three years in this role,” she said.

Langworthy served as an MTSU adviser for nearly eight years before accepting the position of advising manager in July 2014 for the College of Liberal Arts.

What she likes most about her job is helping to guide students through four to six of the most exciting but challenging years of their lives and showing them how an education can change the way they view themselves and the world.

“I see the many ways she works to make sure that her staff feel valued and appreciated … while she is very approachable and warm, the advice she gives students is pragmatic,” Petersen said.

NACADA members have to meet a certain criteria to qualify to be nominated for the award. Applications require letters of recommendation from supervisors, colleagues and students.

“I value their attempts to recognize excellence in advising at all levels,” Langworthy said about the association, which includes 10 regions throughout the United States and Canada. Region 3 is composed of Kentucky, North Carolina, South Carolina, Tennessee and West Virginia.

This is the third consecutive year that someone from the College of Liberal Arts advising center has won a NACADA award. Past winners include Brad Baumgardner (2015) for the 2016 Region 3 Outstanding New Adviser Award and Matt Hibdon (2016) for Excellence in Academic Advising for Region 3.

The Region 3 conference, where Langworthy will be given her award, will be held in Charleston, South Carolina, in May 2018.